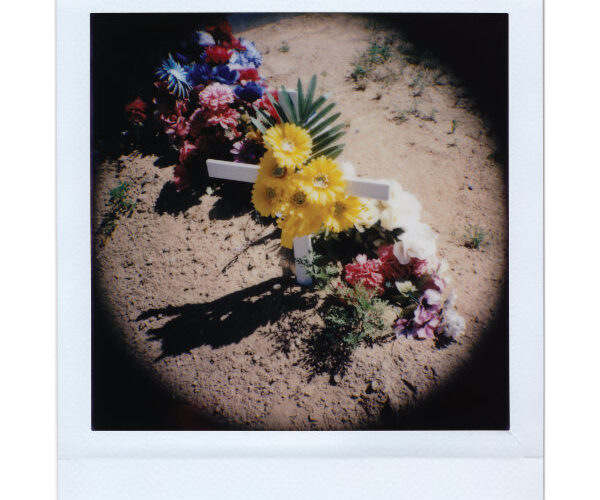 “The child’s corpse was exposed to view, decked with rosettes of brilliant hues, and the mourners talked and laughed gaily, which seemed to me most strange,” noted Lieutenant James W. Abert in 1846, after witnessing a child’s funeral in Santa Fe. The deaths of recently baptized infants were to be celebrated—they enjoyed a sure path to heaven. I stumbled across the lieutenant’s statement in an old Santa Fe New Mexican article in spring 2020 while researching New Mexican cemeteries, a new photographic project I’d embarked upon.

As a child, I found the common depictions of East Coast cemeteries on television and in movies to be “most strange.” Their austere marble and stone markers, sporting eternal angels and cupids, looked nothing like that of the humble, dusty, colorful sites members of my family and community were buried at in La Union, New Mexico. Simple, sometimes painted wooden crosses speckled the desert; heavily adorned with either fake or real flowers, housing an occasional statuette of a saint, namely la Virgen de Guadalupe. What marks the gravesites in the American Southwest as distinct from much of the country lies somewhere between cultural tradition and available materials.

When looking upon a New Mexican burial, one sees a landscape that is both historical and modern at once. Stories of the land are embedded in aesthetic signifiers, invisibly layered with burial reports, family trees, and personal narratives. It is a history of colonialism, harsh conditions, and common disease. It is a testament to ingenuity, cultural exchange, tradition, and religious custom. It is also not simply history, but a constantly evolving reflection of the living. When I photograph a New Mexican burial, I present both a past and a present, the living and the dead.

As the pandemic took full force last spring, I found myself both with the time to go on a statewide cemetery road trip, and frequently contemplating death. Suddenly, death was at the forefront of all media and casual conversation. Not subliminally, not anecdotally, but center-stage. I asked myself: Do we culturally cope with death differently today than before? What can we learn by examining the various ways we handle death?

From outsiders, one of the most common responses to New Mexican cemeteries is shock. The cemeteries are either all too joyous in their bold colors, too primitive in their modesty, or too morbid in their frank celebration. However, I’d like the unfamiliar viewer to find the natural harmony with the landscape in their unique expressions. I also want the familiar viewer to take a moment to honor and appreciate. Dirt mounds, wood, flowers, dried-out cholla crosses, uncarved stones… the most natural elements delicately reconfigured to represent our most natural event: death.
—

J.C. Gonzo is an artist based in Santa Fe, New Mexico. His focus lies in re-contextualizing social and environmental histories as a form of meta-ecological research. His reports are depicted through a variety of media, serving both as a referential document and a celebration of chaos in the natural world.