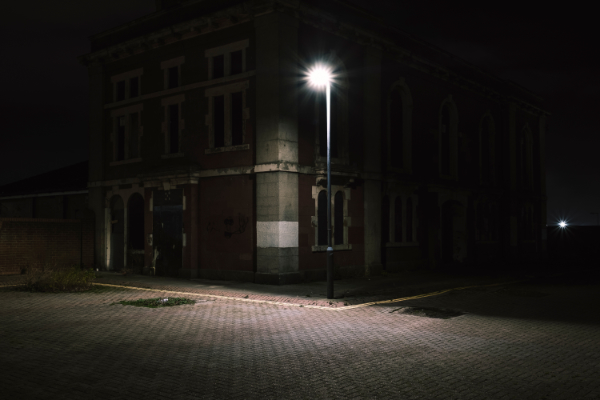 Easy Street. Or, The Year of Getting
a Driver’s License and Exciting
Eldritch Regions of Consciousness

Taking a cue from the sweet effluvium or (so-called) sickle moon, maybe “the dead of night” is no valley of bones, just a figure of speech, the young kid itches to take the family car under screaming streetlamps on a spin; his soul escapes the house like air whizzing from an unknotted balloon, or a space craft hovering in pursuit of the facts which can be drawn from a colorful expression. Last year, surrounded by school buses like enemies, he thought. The dead of night is a cradle of ghostly life.

Blobs haunt errant estates. Stick against the tar-black pits. Radiance bubbles out of sinkholes. Crawling Etruscan Neon. Neon slurps uptown like an oozing movie monster. Time supersedes timeliness, and a wisp of air blows out of the funereal house, an estate sick and tired of disciplining a voyager of vaguer purposes than a philosopher looking at his own imminent death on a watch without a second hand. Emptiness? Eleven o’clock — ergo — is elastic. E. Street bridges ‘beyond good and evil’ at the crack of the devil.

Street sepulchral is a cradle of ghostly life

This is the year of getting even-steven. The street is a flash of a black coat — estranged undertaker servicing an urban underground. The street may keep statistics on the many thousands gone. Its denizens can’t in turn detail its distinct characteristics. The length and breadth of the street is just a generalization, like birth, childhood, adolescence and first love. Hence the kid tends to assume the right to hang out anywhere. Erstwhile curfew hours: conceptually as problematic as the hours, minutes, seconds left to deconstruct whether his license plate is a ticket into a movie theater called society owes me a fun time at equitable cost. Kid ponders whether Easy St. beneath the new moon is Horus’ sarcophagus. Eleven o’clock eastern standard time. His cherubic face albeit precludes XXX clubs.

Street sepulchral is a cradle of ghostly life

The Golgotha of his coming-of-age is Avangelo’s pool hall, Open at Ten. Kid never too discouraged to hope. And peek.  Sedan steers feelings there must be somewhere worth going when evening promulgates semaphores, at a second thought. An obstructed stop sign reads Easy St. 666, No restrictions here.  He considers lying to his parents on a week-end, lying so that he can have thirty more minutes, forty five, at most another hour to drive the sedan. Kid parks near the pool hall — steers his shadow —catches a glimpse interior, poor kid, sees laughing, slightly lewd men and adult woman in an expressionistic thicket, and hears caws, like bird caws in the colorful rainforest distances. A pool stick on a billiard table wets his guilt. Exoticism exfoliates eroticism.  Entails Egyptian Enigmas. Etruscan signage emanates Establishment rules. Environmental hazards. Don’t Drink and Drive. No Resurrections here

sentimental neighborhood tall tales on
then off, polarities puzzled, like a light switch.
The sentiments in between
sketching a picturesque light and dark
make a parable. Though no one
inside the centerpiece paradigm
one city/ one coastline/
where the moral is given
and the temperature is taken
will say who is responsible —
nor how the visions possibly
describe one lowcountry/
one love/
one pulse beat wandering the peninsula amicably.

An uprooted Southerner, Darryl Lorenzo Wellington has been a New Mexican for the past ten years. He is the 2021-23 poet laureate of Santa Fe. His full-length poetry collection, Psalms at the Present Time, was published by Flowstone Press in November; all of these poems appear in that volume.