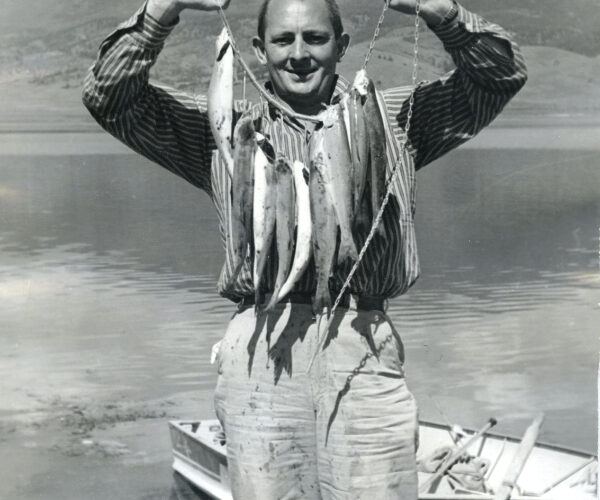 Hillerman proudly displays his catch on a 1959 fishing trip. The author was such an avid fisherman he even included a fishing scene in one of his earliest novels. Courtesy the Center for Southwest Research and Special Collections, University of New Mexico, Tony Hillerman Photograph Collection. Item no. PICT 000-501-002.

For Tony Hillerman, there was only one thing that could lure him away from his typewriter, and that was his fishing rod. On slow news days, beginning in the 1950s, Hillerman would trade his seat at the Santa Fe New Mexican for a spot on the banks of rivers and streams in Northern New Mexico and southern Colorado. Woodrow “Woody” Wilson, a journeyman printer at the paper, first introduced Hillerman to the almost inaccessible Rio Brazos, a moderate-sized stream that feeds the Rio Chama north of Santa Fe. It soon became his favorite spot to fish.

Even after he moved to Albuquerque in 1963, Hillerman made the trek to Northern New Mexico fishing holes. Once, he told an irritated New York City magazine editor that he was running late on an assignment—a cardinal sin in journalism—because he simply had to go fishing. Hardly an apt excuse to a Manhattan sophisticate.

“To be frank,” Hillerman told the editor, “a tipster in the Game and Fish Department told me of some beaver ponds in the San Juan National Forest which should have some big trout in them. They did.”

On occasion Hillerman took one of his children along. Teenaged Anne Hillerman watched her father cast his line into brooks swollen with spring runoff. “He looked so happy that I felt happy too, despite the mosquitoes,” she recalled. “If the fish were biting, we’d eat the wily trout he’d hooked. If not, we’d have crackers and Vienna sausages out of the can with a Hershey bar for dessert.”

In Hillerman’s second novel, fishing and writing came together. Hillerman had run into a problem with his plot for The Fly on the Wall, whose protagonist John Cotton was an Oklahoma state capitol reporter, a post Hillerman had once held. He realized it would not be in keeping with the character of his reporter for him to remain in town pursuing a story that was accompanied by a credible death threat. “I hit upon having him flee to New Mexico, go fishing at my favorite little stream in isolated Brazos Meadows,” said Hillerman. Once there, Cotton realized the threat had been a trick to get him away from the state capital to an isolated spot where he could be murdered.

The stream provided an escape from death. Contriving a weapon, a plot device Hillerman used in his first novel, Cotton attaches heavy lures with barbed hooks, snares his would-be killer’s jacket, and pulls him off a log into the fast-moving waters of the steam. A fly fisherman who read the novel might have been puzzled that Cotton had heavy lures in his tackle box, but Hillerman often preferred to fish with them. “I claim to be a fisherman—a trout fisherman—but I’m not very good at it,” he said.

Soon after the novel was published in 1971, Hillerman inscribed an apology in the front of a copy of the book. “My fellow fly fishermen are exhorted to forgive the misuse of Cotton’s fishing pole in chapter fourteen,” he wrote. “Couldn’t think of another way out for the poor guy.”
—