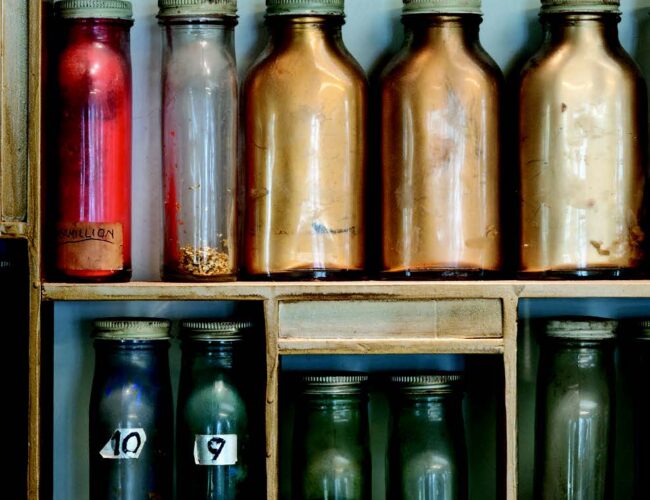 Some of Baumann’s colorful pigments, neatly stored in pharmaceutical bottles. All objects Collection of the Press at the Palace of the Governors, New Mexico History Museum. Photograph by Blair Clark.

Turquoise has become so closely associated with New Mexico that I was surprised to realize that Gustave Baumann (1881–1971), the consummate visual interpreter of Santa Fe and its environs, made only sparing use of it in his colored woodblock prints. There it is, outlining a window or door surround in the depiction of an adobe house or, on occasion, one of the many tints he used to capture the effects of the ever-changing New Mexican sky.

Still, I thought it worth a visit to the re-creation of his studio in the Print Shop in the courtyard of the Palace of the Governors to see if the color was among the powdered pigments preserved from the array he used to make up his inks. Before my eyes could even focus on the shelves of bottled hues opposite the doorway, I was assaulted by turquoise on all sides. Yes, there were two bottles numbered “9” that contained subtle shades of the color I sought, and a couple more of a brighter blue-green, but their delicacy was overpowered by the intense turquoise of the commercial paint on the cabinetry, woodwork, and the printing press itself.

Baumann’s studio behind his home on Camino de las Animas was renovated in the 1970s to accommodate a companion for the artist’s widow, and in 2009, almost forty years later, its contents, acquired bit by bit through donations and purchases, were reassembled in the Print Shop. When the curator, Thomas Leech, emerged from the back office, where he was at work on his upcoming exhibition of greeting cards by Baumann (opening at the New Mexico History Museum October 31, 2014), I asked what inspired the color scheme. Steeped in Baumann’s history and practice, Tom answered without hesitation, “His tools.” As he showed me, many of the handles had been painted turquoise. Bauman revered and treasured tools, even keeping, and using until the end of his life, an English-made set he had purchased as a student in Munich in 1905.

Tom pointed out the artist’s work table, whose original, worn surface was painted turquoise. And then there was the press itself, the very one Baumann had purchased from a Chicago manufacturer in 1917. A subsequent owner had tried to eliminate the turquoise paint in order to return the press to its original industrial black, but conservator Maureen Russell was able to restore Baumann’s transformative color.

After working for the summer of 1918 in Taos, Baumann visited Santa Fe, where he was welcomed by the museum’s director, Edgar Lee Hewett; and his assistant (and first El Palacio editor), Paul Walter. The artist accepted their offer of work space in the basement of the newly built Art Gallery (now the Museum of Art). At the age of eighty, he recalled the experience in a self-interview for the Santa Fe New Mexican (April 2, 1961). He had discovered that “a museum basement is a distracting place to work; somebody is always looking for something or putting something away where it can’t be found.” Nonetheless it was the opportunity to make “furniture for another studio with the help of Sam Huddleson [sic]” (see my piece on Hudelson, “Searching for Good Old Sam,” El Palacio 118 [1]). “With my furniture completed I transferred it to Canyon Road,” he wrote. Then, to escape gregarious members of the Santa Fe artists’ colony who soon settled in, “I reconsidered and moved away—built a studio of my own.”

In 1926 Baumann constructed his ideal workplace, a small independent structure behind the home he had built three years earlier on Camino de las Animas. In the study undertaken by the Historic Santa Fe Foundation before the recent restoration of the house, it was noted that “in much of his decorative paint treatments Baumann added bits of the southwestern turquoise.” The German-born artist asserted, “Given free choice in the matter, I would have selected the Southwest as the place to be born.” There could be no more telling evidence of his love of this place than his painting of the tools he held dear, and the furnishings of the solitary inner sanctum where he created his art, in New Mexico’s signature color—turquoise.