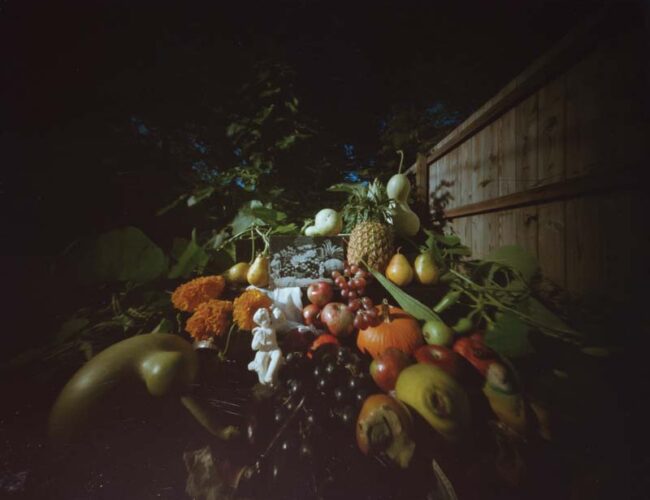 Willie Anne Wright’s interest in early photography led her to the work of British photographer Roger Fenton. Famous as the creator of the first iconic photograph of war— his controversial Valley of the Shadow of Death, depicting a road littered with skull-like cannonballs during the Crimean War—Fenton also captured lush still-life photographs of fruits and flowers in the mid-nineteenth century.It was these lesser-known photographs that inspired Wright’s beautifully realized Fruits and Flowers: Homage to Roger Fenton, currently on display in Poetics of Light: Pinhole Photography, at the New Mexico History Museum.

In the late 1970s and 1980s, Wright experimented with color Cibachrome in various sizes of pinhole cameras. This image was taken with a 16-by-20-inch wooden box pinhole camera adjusted so that the image projected through the pinhole covered the entire sheet inside the box. Wright set up the still life in her backyard. With a five-minute exposure in full hot sunlight, in the middle of the day, in midsummer, it was a race between the deterioration of the fresh still-life components and the time required for an optimum impression on the sensitive material in the box. When this glorious, unique print emerged from the processor, it was evident that pinhole photography had worked its magic once again.