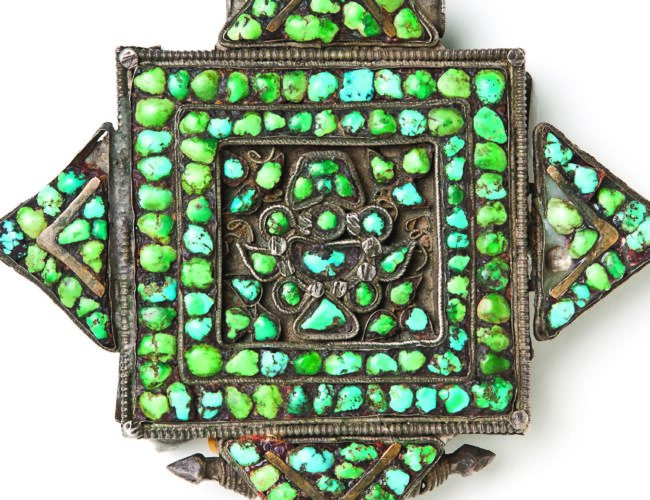 A common example of a ga’u, lavishly embellished with turquoise. The shape of this ga’u is known as a “double dorje.” A dorje (“diamond” or “thunderbolt”) is an important Buddhist symbol connoting the indestructibility and overwhelming power of the Buddha’s spiritual awareness. Paired with a bell, the dorje is one of the most important ritual tools of Tantric Buddhism. A double dorje is two crossed dorjes. In the center of the inner square, turquoise chips form one of eight auspicious Buddhist symbols, a treasure vase, or bum-pa. The bum-pa represents longevity and fulfillment of the highest aspirations. Silver, brass, turquoise, wax. Central Tibet, early to mid twentieth century. Museum of International Folk Art, gift of the Honorable Dorothy Brett (A.1960.12.1). Photograph by Blair Clark.

New Mexico’s adoration of the turquoise stone is palpable. Whether native, transplant, transient, or tourist, denizens of the state are wearing it, admiring it on others, or coveting it in the windows of jewelry shops or the displays of artists. But turquoise is not just a Southwest thing. It is cherished all over the world.

Take for example, the Himalayas.Treasured by Tibetans, turquoise adorns images of deities, ritual and secular objects, clothing, and people. Turquoise, rare and beautiful, is not considered a mere stone. It is a precious stone — a jewel. In fact, turquoise is considered among the most precious articles and ornaments after gold, silver, coral, and pearl. But beyond an affinity for this jewel’s beauty, Tibetan culture sees special importance and power in turquoise.

Despite its geographical isolation high up in the mountains, Tibet has a long and complex history of interaction and trade with other regions, far and near. Turquoise has probably been traded into Tibet since at least the eleventh century. Tibetans’ preferred shade of turquoise is a bright blue hue, the most valued of which comes from Iran. Chinese- and Tibetan-mined turquoise, particularly the latter, are a softer variety and consequently may change colors with age, turning more blue-green from exposure to oils in the skin and other elements (color change, especially in untreated stones, may vary depending on the individual and his or her constitution). Because of these properties, some Tibetans associate turquoise with the cycle of life: bright and vibrant in youth, fading in color with age and declining health.

The use of turquoise in Tibet is often amuletic. The word yu in the Tibetan language means “turquoise stone,” and la means “spiritually above” or something “higher.” The word layu refers to resplendent turquoise imbued with “vitality” or “life-essence.” Yu by itself is special, but through tantric ritual performed by a lama (a teacher of the dharma, a complex worldview which may be understood as the teachings of the Buddha), layu is given a life-essence and provides protection from harm, negative activity, or sickness. Thus, wearing turquoise is believed to offer protective and medicinal functions and to bring the body and mind into balance. It keeps la within the body, where it is needed for proper, healthy balance and overall wellness. Consequently, layu is usually the first item of jewelry given to infants for protection, and generally, all Tibetans — men, women, and children — wear layu, even if only a single bead, around their necks. Both men and women wear turquoise earrings, and turquoise rings are also important because it is believed that la can leave the body through a finger.

Since ancient times, if someone is sick but cannot get to a lama for treatment, they can send their layu instead and still benefit from ritual treatment of the turquoise. Academic publications in the late nineteenth and early twentieth centuries reference early Tibetan medical texts, which list turquoise as a medicament functioning specifically to remove poison and heat (sickness and imbalance) from the liver. Other substances listed in these early texts include gold, silver, copper, iron, pearl, coral, conch, lapis lazuli, mother-of-pearl, and mercury. These substances may be worn, offered to deities and demons, and, after ritual and purification treatments, mixed in specified proportions to make a “precious pill” and ingested. While each substance has its own function (coral for instance is said to keep blood healthy and pure), these metals and jewels bring balance to one’s being. Balance, in essence, is what keeps people healthy and safe from harm that may be caused in the physical or spiritual realms.

A common jewelry item worn by Tibetans is a ga’u, or amulet case, a kind of portable shrine. Ga’u may contain written prayers and mantras, talismans, or images of special lamas or deity figures. All of these items offer protection from harmful energy or spirits, which can cause sickness or other stressors affecting life’s balance. Ga’u come in many shapes and sizes; not all of them are worn. They may be placed on a home altar, and while some are quite large, they are meant to travel, usually attached to a belt or worn around the neck. They range from simple containers of metal to those of silver (and less commonly gold), elaborately set with jewels.

Turquoise is so precious in Tibet that it is offered to deities on altars of worship as a gift, for ornamentation, and for spiritual healing rituals. Demons are also offered turquoise jewels on altars to keep them pacified so that they will not attack.

Whether for deities or demons, turquoise offerings help maintain that essential life balance. In addition to acting as an offering itself, turquoise jewels serve a decorative function and beautify other ritual items used in ceremony and/or daily prayer.

Beyond ritual, protective, and medicinal functions, turquoise is also a status symbol. Secular or sacred items with a great amount of turquoise might be reserved for people of religious status (such as high lamas), administrative status, or people of wealth. A bowl of turquoise and other precious articles such as coral would be found on the altar of someone who could afford it. Those of more modest means may place a single turquoise stone or a mix of other items on their altar. Also loved as a thing of beauty, there are countless poetic allusions to the stone. It is stuff of legends and romance found in popular folklore and the namesake of nature’s wonders, such as turquoise lakes and turquoise heavens.

The Museum of International Folk Art has a small collection of Tibetan folk art that includes jewelry, ritual items, and amulets. Presented here are some examples of those that include turquoise stones. Additional items from the collection are currently on view in the exhibition Turquoise, Water, Sky: The Stone and Its Meaning, at the Museum of Indian Arts and Culture.

Felicia Katz-Harris is curator of Asian and Middle Eastern art at the Museum of International Folk Art. Her exhibits include Tako Kichi: Kite Crazy in Japan and Dancing Shadows, Epic Tales: Wayang Kulit of Indonesia, which won an award for “Overall Excellence in Museum Exhibitions” from the American Alliance of Museums.

The author would like to thank special friends, Khenrab Choephel of Barcelona, Spain; and Lama Gyurme Rabgyes of Santa Fe, New Mexico, for their clarification of certain ideas and translations presented in this article.