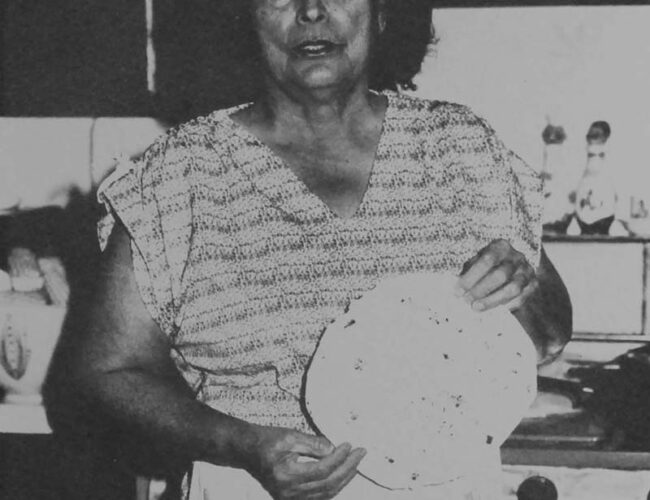 There was no wind the day Juana battled the machine.
Smoke rose from the stacks of the downtown tortilla factory
slow as the wrinkled and steady hands, las viejitas.
Cocineras whose fingers were callous as the spirits
of their mothers.
They were the assembly line of ancient faces.

They worked for coins off their husbands’ wages.
Mothers of the new deal
labored their bones, dull
with the factory whistle at dawn.

Harina y manteca
became the skin on their palms.
Fifty pounds of flour each dark morning,
as their grip stung with salt grains and leavening.

Tortillas rounded like the suffered
crown of the God carved in the altar,
their God hung above the stove.
Round rolling pins cut from cedars
smoothed with hidden splinters in the hands,
and dough rose before the sun.

This morning hung bitter in Juana’s mouth,
like the daylight that did not stretch
over her tongue when she woke,

when the women found machines
on the floor where they once stood.

Here are your replacements,
the boss growled like rusting metal,
There’s no work here. I want you all out.

And the ancient faces gazed like forgotten saints
they once prayed to.

Some cursed the foreman’s name,
their fists clenched tight as the gears
in the machine that took their jobs.
But Juana did not move,
she stood steel-heavy
and her wrinkles run fierce
like flooding arroyos
when she said,
I’m faster than any damn machine.

The engine fired,
conveyor belt rolled tamales,
each an exact copy of the last.
Juana took the table beside.
Handful of masa.
Cornhusk hidden in her skin.

Each glide of her hand
like wiping tears from her daughter’s face,
wiped sweat on the back of her fist
her salt, a blessing of food at the table.

But she knew it didn’t matter if she’d beat the machine
regardless, she’d gone like so many Mexicanas
rotting like nopals beneath a tractor’s heels

just as the men’s backs were replaced
with forklifts and backhoes.

But an engine does not name its children
after a passing rain cloud
does not brush dead leaves from headstones,
and never learned the recipe from her grandmother’s tongue.

As the engine sang the death of the laborer’s breath,
the foreman’s eyes never left Juana’s face
as the machine slowed down.
Smoke of motor oil snaked the air
and the conveyor stopped.

Her shadow stained the floor where she stood.

The next day, the machines unloaded,
the women manned the controls
but Juana never showed for work.

They said she joined the army.
Maybe opened a restaurant.
Some said she became a corn plant
rooted in burning soil,
but really, none of them knew.

Still their throats all burn from the steam,
the gears grind off and rust in their dreams,
their mouths still dry when they say
the name of the woman and sing legends of the day
Juana Henrieta made tamales against the machine.

Damien Flores graduated from the University of New Mexico, where he was a member of the two-time National Champion Loboslam team. He is a four-time ABQSlams City Champion, and is an educator in Albuquerque and host of the Spoken Word Hour on 89.9 KUNM-FM. His work has appeared in numerous journals and anthologies.