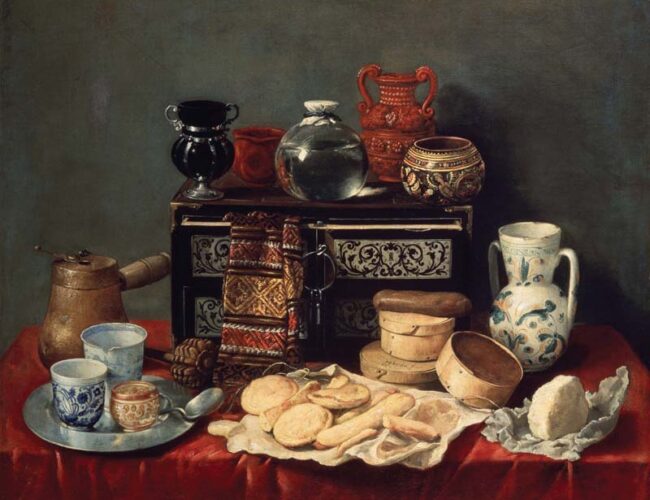 Food is such an evocative subject for all of us who love to eat. Even when the real thing isn’t right under your nose, images of food, like gorgeous color photographs of succulent fruits and vegetables or steaming plates loaded with enchiladas, make you salivate and head for the kitchen.

That response has driven artists to portray the vast array of food types and their associations, from luscious to disgusting, since ancient times all over the world. Before the eruption in AD 79 of Mount Vesuvius, near Naples, for example, Pompeii was a city of villas extravagantly decorated with paintings and mosaics. While several examples survive of exquisitely and delicately rendered still lives painted on walls, a trompe l’oeil, or fool-the-eye, floor mosaic in what was likely a dining area wittily depicts the remains of a fine meal strewn carelessly across the floor, as if just abandoned by a drunken and satiated group of vulgar diners. Complete with a mouse on the verge of devouring a cracked nut, shells, bones, lobster claws, fruits, and other detritus that no longer looks appetizing, it reminds us of the inevitable deterioration and rot of all living things.

The meal most often depicted in European painting from the Middle Ages through the seventeenth century was undoubtedly the Last Supper. Within a religious scene, the elements of that simple but symbolic supper could be depicted with surprising naturalism. In a Spanish altarpiece by a late-fifteenth-century artist called Maestro Bartolomé (now in the University of Arizona Art Museum in Tucson), the sacred red wine glows in its cylindrical clear glass cup, and the texture of the rustic round bread is so closely observed that it can probably be identified as the traditional rosca of northern Spain, where the artist is believed to have been born.

In the seventeenth century, European painters perfected the still life genre, which emphasized the depiction of food in kitchen pieces or table arrangements, especially in Spain. Often with no overtly religious associations, the paintings of food in this era could nevertheless evoke a spiritual, contemplative mood. Or they could move far beyond the sobriety of implicit piety to a raucous, even bawdy portrayal of material bounty. These paintings were often displayed in the kitchen or dining room to be admired for their breathtaking realism and detail in the objects represented.

In his elaborate composition of a table and inlaid chest laden with chocolate service, ceramic and glass vessels, textiles, cheese, sausage, and pastries, Antonio de Pereda shows us products not only from his native Spain but also from the New World, like the polished red clay jar from Mexico known as a búcaro. This vessel was prized for its flavor, fragrance, and healing and purification properties, which sometimes provoked owners to bite off pieces to savor. Pereda celebrates the worldly and offers a vision of abundance in Spain and its colonies. Like Bartolomé’s rendering of Spanish bread, the irregular shapes and soft surfaces of foodstuffs contrast with the hard, polished, and reflective ones of the vessels, providing the artist an opportunity to demonstrate his skill at invoking in paint the senses of touch, sight, and taste, and the appearance of three dimensions using only two.

In the first three centuries after the arrival of Spaniards in the Americas, the themes of most imagery were religious, but what secular imagery there was focused on the representation of the so-called New World for European armchair travelers. The hunger for knowledge of this exotic world was happily satisfied by artists who portrayed the native flora, fauna, customs, dress, and of course, food, and in the process defined their national identities. The depictions of food are found most commonly within the genres of castas, or racial-mixture paintings, and other scenes of daily life, and are among the most original contributions to subject matter of the era. Casta paintings attempted to show the unique racial combinations of which Europeans had no knowledge and were usually produced in sets of sixteen formulaic couples and their offspring, from “refined” (Spaniards) to the most “uncivilized” (natives or blacks). Most of the known sets were sent back to Europe in an obvious effort to educate about the Americas, and included in them were typical New World products, often identified with inscriptions, in proper scientific Enlightenment manner.

The origins of these subjects may be found in the more systematic studies of native populations that first appeared in sixteenth-century books written by Spaniards newly settled in the Americas and attempting to describe the world they found. The Spanish friar Bernardino de Sahagún sent back to Spain an encyclopedic but controversially objective account of life and customs in Mexico, including produce and its marketing. A large market scene of eighteenth-century Mexico shows fashionable white men—Europeans or creoles (white Europeans born in the New World)—and children in European-style clothing surveying the overflowing produce stall of two mestizas, who offer native items such as bananas, coconuts, and pineapples (the latter highly prized and expensive in Europe) on a shelf behind the vendors, and jicama, zapotes, and cherimoyas highlighted in the foreground, in a grand vision of exoticism and plenty, with more than a hint of the economic and ethnic divide in Mexico City around 1780.

The subject of food, from cultivation to consumption, may also be found in the collections of the state museums in Santa Fe, which mostly concentrate on the New World. A colonial-era Peruvian quero, or ceremonial drinking cup, in the collection of the Museum of International Folk Art, portrays a coca vendor on his way to market. The scene demonstrates the enormous cultural and economic importance of coca, chewed daily for both religious and nonreligious purposes, throughout the history of Peru.

Artists also turned to other mediums beside painting. In the Girard Collection (on permanent exhibit at the Museum of International Folk Art) are numerous small-scale representations of food vendors and whole market scenes showing local products charmingly but also convincingly rendered in three-dimensional sculpture and surface paint. These scenes of daily life became especially popular in the nineteenth century, in the aftermath of independence from Spain, when tourists and industrialists from Europe and the United States were first encouraged to engage with the new nations and were avid buyers of souvenirs of their travels. And the Last Supper was still a good excuse to depict the products of the table, as in the round bread and large silver fish of this example from Portugal, dating from the 1960s.

In a mind-bending twist of the tradition of trompe l’oeil painting, Santa Fe artist Colette Hosmer has turned on its head a seventeenth-century Italian still life, Fish and Crustaceans, by Jacopo da Empoli, shown at the Museum of Art in the exhibition Natura Morta in 2007. Where the original fools the eye with its meticulously painted illusion of the sea life on a table, Hosmer recreated the same elements in a shallow, three-dimensional painted sculpture, which fools the eye into thinking it is a two-dimensional painting.

Not all examples of food in the collections are so directly representational, or such clear descendants in the evolution of art, but they are full of information about New Mexico’s rich cuisine and its history. The New Mexico History Museum boasts a collection of vintage menus from celebrated local restaurants. Opening a window onto food culture of the middle twentieth century is La Fonda’s bright orange one from 1953, featuring unique local dishes such as chile con carne and sopaipillas, for which New Mexico is renowned, but with some items not as often ordered these days, like the cream cheese and guava chango, or the side of pickles accompanying the more iconic enchiladas. Summing it all up is Patrick Oliphant’s spot-on portrait of Karen, everyone’s favorite Santa Fe waitress, smiling broadly and undoubtedly making wisecracks as she carries a tray of food and drink to devoted customers at the Plaza Café.

Barbara Anderson is a former director of the Museum Resources Division of the New Mexico Department of Cultural Affairs and is now a curator of the forthcoming exhibition The Red That Colored the World, which will open at the Museum of International Folk Art in May 2015, and at the Bowers Museum in Santa Ana, California, in November of that year.