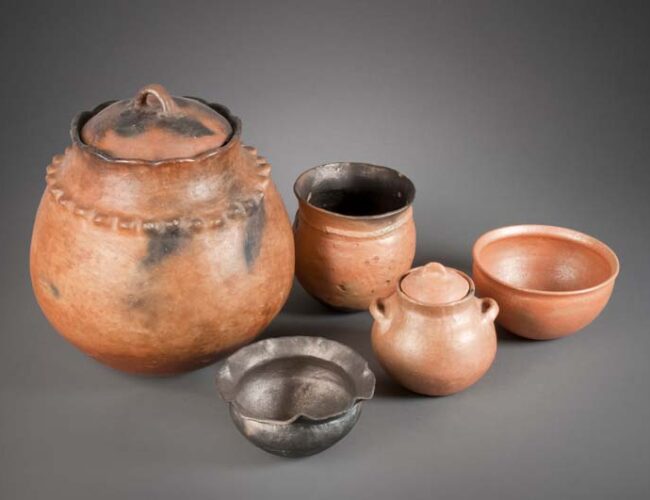 A selection of Taos and Picuris micaceous pottery from the Museum of Indian Arts and Culture/Laboratory of Anthropology collections. Photograph by Blair Clark.

Just as chiles might be regarded as the iconic food of New Mexico, micaceous pots are the region’s iconic cookware. While at heart they are utilitarian, micaeous pots are often treated as precious objects to display and handle with great care. In fact, it’s not unusual for people to buy micaceous pots, say, at Santa Fe’s Indian Market, then put them on display and never use them at all. Certainly, they are not inexpensive and they are handsome enough to simply admire. But originally the pots were made for cooking. If and when you do cook in a micaceous pot you may find that its beauty takes on complex dimensions, for it will change the nature of both the food cooked in it and cooking itself. Though cooking vessels aren’t usually thought of in this way, micaceous cookware is also, in some respects, an ingredient, for many people say—and I agree—that these pots impart a special flavor to foods cooked in them—and even improve the taste of water that has been stored within. Many swear that beans are tastier when cooked in micaceous clay. Potter Felipe Ortega suggests that it’s the combination of the acidic mica with the more alkaline clay that makes food taste so much better. “Sweet” is the word he uses. Not sweet as in sugary, but sweet as in balanced, as opposed to harsh or bitter. Perhaps not unlike when people say “Sweet!” about something that is particularly nice and well worked out.

Micaceous clay is a naturally occurring blend of mica and red clay, found in pockets in the mountainous areas that rise above New Mexico’s Rio Grande valley floor. It is not a matter of adding mica to clay. Many pots look as perfectly symmetrical as if they had been thrown on a wheel, but often there are areas of gentle swelling, dips, and other irregularities that suggest the presence of the hands on the clay. One of my pots, made by New Mexico artist Priscilla Hoback, is marked with a hair from one of her horses, a delicate black line on the clay that feels somehow like a signature. The hair burns away, leaving just the trace of minerals it contained. Occasionally a pot will have a design etched on it, or a design formed by a ribbon of clay, but many functional micaceous pots aren’t adorned except with the golden flecks of mica and blooms the fire makes. They may have lids, or not. They might curve softly at the rim, like the exaggerated folds of a fluted piecrust, or the top may flare simply and elegantly outwards. The only colors present are the colors of earth and fire.

I first encountered micaceous clay when I met Felipe Ortega, a Jicarilla Apache who lives and works in La Madera. He also teaches pottery making in Mexico, Santa Fe, and Switzerland. I first made his acquaintance when he stepped away from a class to sign an enormous pot that he had made for my friend Hugh Fitzsimmons, a bison rancher in West Texas. Suddenly Ortega turned to me and asked me how to spell my name. I knew that the pot was intended for Hugh’s wife, not for me, but for a split second I hoped that this magnificent work with its soft form and subtle shine would be mine. I was smitten. Many years passed, however, before I had a micaceous pot of my own.

It happened like this: A woman who lived in part of our house in between house sits began studying with Mr. Ortega and she too became impassioned by this clay and way of working. Watching her work, I was impressed with what a long and tedious journey was involved in the making of a micaceous pot. Each one is shaped by hand, by stacking coils of clay on top of one another. Once the clay has dried, it’s rubbed with a piece of sandstone to lighten the overall weight and even out any heavy spots. Following that, a slip that has more mica in it than is in the body is poured over the pot; then the whole thing is polished again with a stone to bring out the mica’s sparkle before the pot is buffed with a cloth. It takes a lot of patient hours to get to the point when the pot is finally ready to be fired, either in a wood fire built on the ground or in a shallow pit. Where there is contact between the pot and the burning wood, soft plumes of gray and black, called fire clouds, appear and mark the vessel. When the air supply to the fire is reduced, the pot emerges black. The many hours combined with the talent it takes to produce a handsome, useable pot make micaceous ware very expensive—upwards of one hundred dollars a quart or more. No wonder people are nervous about actually cooking in them. But all good cookware is costly. It’s just that metal pots don’t break and clay pots might.

Like many, I was shy about actually using my micaceous pots, and I hesitated to bring my first pot to the stove, thinking

it too fragile. But our potter friend assured me that me that it was strong. Really strong. “Do you know how hard it is to break up a pot that didn’t work out?” she asked. “They’re tough!” She was right. My pots have taken almost a daily turn on the stove and in the sink for the past seven years, with no chips, cracks, or other ill effects, though now one has a hairline crack. Another’s handle fell off but was glued back on. A third, a thinner vessel, got a hole in the bottom when I was way too rough with a wooden spoon. Still, I can’t imagine cooking in anything else.

Nothing fires my imagination quite like cooking in micacous pots, although I do turn to the sturdy cast iron pots and pans as well . . . I love the look and feel of the clay. It’s softer than metal and lighter than cast iron. The clay gives off the subtle scent of minerals and earth when heated, and it cooks foods evenly and beautifully. Beans are the most common foods to find simmering within the walls of micaceous pots, but you can cook pretty much anything in them. I have slow-roasted Navajo-Churro lamb in them and made chicken fricassees, vegetable soups, chilis, and braises. I can’t really say with any kind of proof why these foods seem to taste better than if they were cooked in more conventional pots, but I know that I enjoy the process more—the light feel of the clay and the soft sounds utensils make when they come in contact with the rim of a pot. I also just like to have the pots out where I can see them, because their shapes and colors are so enjoyable to look at.

You can use them on the stove. Use a medium to low flame and plan on giving them a little more time to warm up than a metal pot. You can put your fat, if using any, in the pot right away and its aroma will tell you when the clay is hot and you can start cooking. You might notice a smell coming off the pots—an earthy kind of smell—and that’s normal. And nice. I especially like to use my pots for beans, certainly a traditional food to cook in earthenware pots everywhere. But there’s no need to limit yourself to pot beans. Bean soups and stews are also excellent when cooked in these pots. I use my larger lidded pot to braise lamb raised by my neighbor, Tim Willms (Talus Wind Ranch). I’m partial to rubbing a leg with a mixture of spices and cooking it in the oven at 225 degrees F. I usually put it in the oven before I go to bed and by 2 or 3 in the morning the smell is so powerful that it wakes me up and I turn off the oven, and leave it there. Of course it’s falling off the bone by the time I want to serve it and just needs a little rewarming on top of the stove. Another Galisteo neighbor makes a comal from micaceous clay for cooking tortillas or warming those that you’ve already made or bought—perfect with those beans and the lamb, or a green chile stew. Or a pot of posole. New Mexican ingredients seem to be particularly well suited to cooking in clay.

I don’t know what the lore is, if any, about washing micaceous ware, but if mine is greasy, as it will be after cooking a leg of lamb, I wash it by hand in hot soapy water, then rinse it well and set it aside to dry. Sometimes there are bits of food that need to be scrubbed away, but you’re not going to hurt or break your pot by doing so. With use, the surface color might change. Drips from whatever you’re cooking can remain as stains, especially visible on a lighter colored pot. But that becomes part of the pot’s patina and its history with you, years spent in your life.

I might be a little nervous if I were cooking in a thousand-dollar pot (and it’s unlikely that I’d have one), but I do know this: these pots are works of art—the kind of art that you can handle, smell, cook in, wash, and use every day. And micaceous cooking pots repay you with a subtle ingredient: the sweetness of this clay, and all that it imparts to the foods you cook along with becoming linked to the thread of culture that winds from the past into the present.

Deborah Madison is a food writer who lives in Galisteo, New Mexico. A former restaurateur and the author of fourteen books on food and cooking, she has lived in this area for the past twenty-four years. She has won several James Beard Awards, as well as other awards, for her writing.