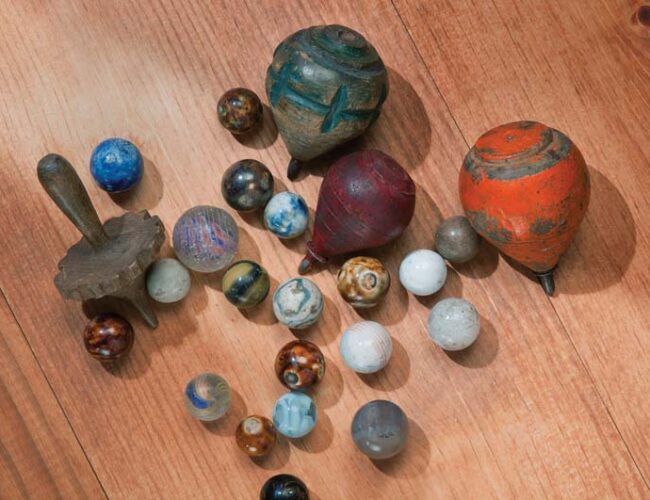 These marbles represent the variety of types and sizes that could fill a child’s collection. The tops show two different styles: round twirlers, or “teetotums,” and a flat-bodied top. New Mexico History Museum, gift of Phyllis Harroun.

In 2013 the New Mexico History Museum and Palace of the Governors made plans to exhibit historic toys and games from the museum’s collection. That winter I visited the Office of Archeological Studies with archaeologist Matthew Barbour to see artifacts recovered during the 2005–2008 excavation of an area that now houses the Santa Fe Community Convention Center. The site was of particular interest to me because it lay only a few blocks from the New Mexico History Museum and the historic Palace of the Governors, where toys would be displayed the following year.

The excavation area had served as quarters for Santa Fe’s Fort Marcy officers and noncommissioned officers and, later, homes for nonmilitary families. Now, on a table in front of me lay a fragmented doll head, one of only several hundred objects that reflected children’s play from the nearly 70,000 items recovered from the excavations. Along with other childhood indicators, including buttons, baby bottles, and children’s shoes, ninety-one doll fragments had been found. One of the densest deposits of these dolls was from a set of privies dating primarily to the latter half of the Territorial period (1847–1912). The dolls recovered from the outhouses were all porcelain, except for one doll head made from rubber by the Goodyear Rubber Company.

First patented in the 1850s by the Goodyear Rubber Company, vulcanized rubber doll heads quickly became a popular alternative to imported and US-manufactured porcelains. By 1881 the Goodyear Trade Catalog listed three pages of rubber dolls of varying sizes and appearances. Due to the fragile nature of the rubber, these dolls rarely survive in pristine condition and frequently lose most of their original paint. Our Goodyear Rubber Company doll head was not nearly ideal, but some paint was still present, and its rubber-formed locks of once-blond hair made identifying the piece straightforward. Museum conservators stabilized the doll in its current condition, but nothing more was discovered about the doll’s existence before it ended up in the privy, nor about who might have owned it. With her single eye on a nearly shattered face, she stared up at me from within an archival plastic bag and sparked a curatorial love affair that fueled me to question what we can know about play, toys, and games in New Mexico’s history.

Our affectionately named “Goodyear Girl” reflects a common obstacle we face when displaying historic childhood toys and attempting to explain their use in play. When played with, toys deteriorate and are discarded as children outgrow them. Children do not leave correspondence files or other primary sources we can turn to when searching for information about how children played in the past. So, we must look elsewhere.

As fate would have it, many collections in the New Mexico History Museum’s coffers offer windows into childhood in brief but meaningful ways. A terracotta doll that, rosy cheeks and all, traveled up the Camino Real, was given to a New Mexican child, and later was outfitted with a more contemporary dress emblazoned with neon plastic buttons, helps show the evolution of a toy through generations. A German-made porcelain doll with a pink skirt resting on a petite hoop in the collections was once played with by the influential Hispanic and Native arts scholar (and frequent early contributor to El Palacio) E Boyd before she settled in New Mexico as an adult. An American Girl Doll, created by the Pleasant Company in 1997 with help from the Palace of the Governors’ staff tells the story of Josefina Montoya, a young girl living on a ranchero outside of Santa Fe. Her wealth of accessories and an illustrated book speak to contemporary children’s love for dolls.

Also missing one eye, a stuffed elephant in the Hollenback Collection led to other finds in the story to be told about children in the Southwest. Amelia Hollenback Jr.— known as Minna to her family—arrived in the United States in the 1890s. She and her family traveled west via the railroad on many vacations, passing through New Mexico for the first time in 1897. In the 1920s Minna’s love for the Southwest led her to plant more formal roots, and she eventually commissioned a home, designed by John Gaw Meem, to be built in the area in 1932. Her family later donated a large collection to the museum, including her stuffed elephant. Along with the plush animal was a small carte de visite taken before the family’s immigration to the States that showed Minna with her companion elephant at her side—a playful motif employed by many New Mexico photography studios at the time.

As the Southwest entered the twentieth century, photo studios already existed in many cities and towns, where local families and travelers could commission formal portraits. Studios frequently employed the power of toys as props to keep children’s attention. In some photos, we see the familiar porcelain dolls, and in others, balls, trains, wind-ups, and stuffed toys. All the images reflect the small totems of play that toys are for children; each helps to illustrate the types of toys

being held by young hands at the turn of the century in the Southwest. Other historic photographs helped identify informal play. Circles of children shooting marbles and spinning tops appear repeatedly. In the late nineteenth century, New Mexico children enjoyed playing with tops and marbles, alone or in groups. Games played with tops often included marbles. Early versions of marbles were made of clay and porcelain; glass versions came later, spurring a new level of collecting. Examples of each stage in the evolution of marbles appear in the museum’s collections. Some used in games bear impact marks or chips from colliding with other pieces or tops.

This impromptu play in groups has been described in adult memoirs of childhood in New Mexico. As a Dawson, New Mexico, resident suggested in one such reflection, “It is really the unorganized, the free things, that are remembered most. Every neighborhood in town, from Capitan to Five Hill, had a favorite spot, a level and smooth patch of dirt, where kids would lay down a small piece of stretched-out rabbit skin, put their knuckles on the rug, and shoot marbles.”

Some games don’t involve toys at all. Children run, jump, and tag using made-up rules and found materials. But toys still bring out the some of the best in our imagination; whether we are playing in a group or on our own, the toys and games we create as children help shape us as adults.

In the twentieth and twenty-first centuries, mass-produced toys are the norm. Sturdy or flimsy as they are, these toys, like toys of the past, are often loved into oblivion. When people put the ways of childhood behind, their toys are too often tossed aside and forgotten. Thankfully, some have survived, and to celebrate our fifth anniversary, the New Mexico History Museum is sharing examples of historic toys in our front window.

Toys and Games: A New Mexico Childhood is on exhibit in the lobby of the New Mexico History Museum through January 2015.

Meredith Davidson is curator of nineteenth- and twentieth-century Southwest collections at the New Mexico History Museum and Palace of the Governors. She is currently working on an upcoming exhibit exploring the history of Fred Harvey in the Southwest.