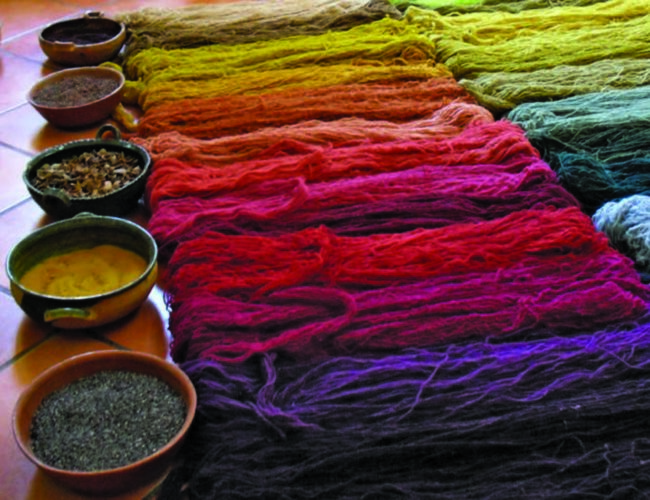 Phoenicia — not New Mexico — is the land of purple. However, purple will get the spotlight this summer at El Rancho de las Golondrinas, the living museum just south of Santa Fe. Las Golondrinas will participate in the Summer of Color by rounding out the color wheel with history’s most elite and sought-after color.

Purple is associated with royalty, power, and vanity, and the reason for that is simple. Purple dye was originally obtained by crushing a type of sea snail, the spiny dye-murex, which is found in the eastern Mediterranean. It would take roughly 10,000 of the mollusks to create enough dye for a handkerchief, or 250,000 of them for a toga. This dye was considered particularly beautiful because the intensity of the purple hue seemed to improve, rather than fade, as the dyed cloth aged.

As early as the fifteenth century BC, dye centers were developing along the Levant of present-day Lebanon. In cities such as Sidon and Tyre, entrepreneurs were taking advantage of the natural resource, and producing purple dye from murex became a lucrative enterprise. It was not, however, a glamorous one. In addition to working with your hands submerged in hot water and chemicals all day, chances were you stunk. The massive quantities of snails had to sit in vats in the sun for days for the purple to appear. The ancient Egyptian Papyrus of Anastasi states: “The hands of the dyer reek like rotting fish.” So pervasive was this stench that the Jewish Talmud specifically granted women the right to divorce any husband who became a dyer after marrying. In the third century, cloth dyed in purple was literally worth its weight in gold. Clothing dyed with purple from murex — which came to be known as Tyrian purple — was mentioned in the works of Homer and Virgil.

Worlds away, a similar sea snail called Purpura pansa was being harvested for dye on the Pacific coast from Mexico down to Costa Rica. As in the Old World, ancient Mesoamerican codices deemed purple the color of nobility. The Mayas of Central America used the dye to color fabric for religious ceremonies, and the Aztecs farther north used it to paint ideograms, where it symbolized royalty. The difference in the New World was that the method for extracting purple was a bit less putrid than in the Old: the ink of Purpura pansa could be extracted without killing the creature and letting it rot. The snails’ ink would be harvested once a moon, and then they would be returned to their rocky homes to regenerate the substance. (Today, the tradition of dying with Purpura pansa has only survived in remote regions of Oaxaca and Michoacán in Mexico, and with the indigenous community of the Borucas in Costa Rica. Because of exploitation in the 1980s by Japanese companies, Purpura pansa has been declared a protected species by the Mexican government.)

Newer, easier-to-produce dyes came into favor in later years; for example, a popular dye which arrived in Europe from the New World during the Renaissance was made from the wood of the logwood tree, which grew in Spanish Mexico. Different minerals could be added to the dye to produce different hues: blues, reds, blacks, or, with the addition of alum, a purple color. The downside was that, unlike Tyrian purple, this dye was not fade-resistant. Purple could also be achieved by combining two other rare substances: red from cochineal or madder, and blue from indigo. Articles dyed purple with cochineal or madder and indigo made their way up the Camino Real from Mexico to the Spanish colonies of New Mexico and were traded — not surprisingly — at premium prices. For this reason, purple is not commonly found in Rio Grande textiles or in traditional New Mexican colcha embroidery. As in much of the Catholic world, purple was used for Lenten ceremonies in the region, but otherwise was rarely seen.

This summer that will change, and the focus will be on purple at El Rancho de las Golondrinas. Master weavers will experiment with making purple in the dye shed using plants cultivated in the historic fields. These dye plants will grow alongside other purple herbs, foods, and flowers in celebration of el color morado. As part of the ¡Viva Mexico! event in July, in collaboration with Museum of Spanish Colonial Art, acclaimed Oaxacan weaver Bulmaro Pérez Mendoza will give a talk and demonstration on dyeing techniques (including achieving the perfect purple). Visitors can also celebrate purple at the Spring Festival & Fiber Arts Fair, the Herb & Lavender Fair, and the Santa Fe Wine Festival.

Zelia Nuttall. “A Curious Survival in Mexico of the Use of the Purpura Shell-fish for Dyeing. In Putnam Anniversary Volume: Anthropological Essays Presented to Fredric Ward Putnam in Honor of His Seventieth Birthday, April 16, 1909 by his Friends and Associates, ed. Franz Boas, 368–84. New York: G. E. Strechert.