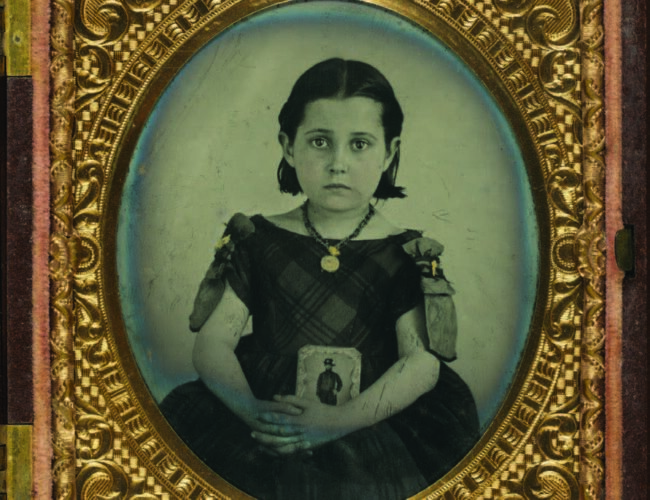 Unidentified girl in mourning dress, ca. 1861–1870. The girl holds a framed photograph of her father. Judging from her necklace, mourning ribbons, and dress, it is likely that her father was killed in the war. Courtesy of the Library of Congress.

[M]ay my tongue cleave to the roof of my mouth if I forget the difference between the parties to that bloody conflict. I may say if this war is to be forgotten, I ask in the name of all things sacred what shall men remember?

– Frederick Douglass, address at the Graves of the Unknown Dead in Arlington, Virginia, May 30, 1871

As the first Civil War battles raged between America’s northern and southern states, Texas Confederates launched a plot: head north and west through the New Mexico Territory and seize California’s goldfields and sea ports. In 1862 battles erupted in Mesilla, Valverde, and Glorieta, New Mexico. Confederate forces briefly occupied the Palace of the Governors in Santa Fe. Despite such advances, breaks in supply chains forced the Texans to retreat, though they continued to claim New Mexico as part of the Confederacy. And thousands of New Mexicans served in the Union Army.

While the major eastern battles of Shiloh, Antietam, and Gettysburg roiled the nation, New Mexico’s role in the Civil War faded and is not as well known today as the history of the war on the well-memorialized battlegrounds back east. Here, what was left behind—cased-image portraits of soldiers and their families, a tattered flag, postwar lithographs—holds mysteries: unknown faces and untold stories.

In 2014 the Santa Fe Opera approached the New Mexico History Museum with a collaborative proposal: develop an exhibit and public program series on the Civil War to align with the 2015 world premiere of Cold Mountain, adapted by composer Jennifer Higdon and librettist Gene Scheer from the novel by Charles Frazier. The museum took the opportunity to go beyond a traditional exhibit approach and invited three curators to approach the subject of fragments and memories from different angles. The result is Faded Memories: Echoes of the Civil War, on exhibit through February 26, 2016. Each curator provided El Palacio with a brief statement on their approach, below. More information and a list of public programs developed around the exhibit’s themes is on the museum’s website, nmhistorymuseum.org.

We know nothing lasts forever, and yet we struggle for permanence, clinging to memories, collecting artifacts, and creating memorials, trying to hold on to something, or someone, long after they are gone. Photography, the most contemporary of art forms, offers us the opportunity to illustrate the tragic Civil War love story of Cold Mountain with 150-year-old cased images housed in the Palace of the Governors Photo Archives. In these portraits we see the faces of those who fought, those who died, and those who were loved. To look into the eyes of these portraits is to be transported into the presence of these subjects. That is almost living history. – D. K.

Anonymous. Unidentified. Date unknown. Curators use these terms to reflect the absence of information in historical work. Artifacts help us tell stories, but they often remain shrouded in a veil of unknowable details. Objects that have been through the trauma of war often become unique totems of memory passed down through generations. Many artifacts in Fading Memories: Echoes of the Civil War carry unknown secrets in their fibers and form but help curators and museum visitors glimpse intimate details of the stories we tell.

A hand-stitched, thirty-four-star flag sits as a cornerstone in the exhibit. In August 1861, the Ladies of Denver presented this piece to the recently formed First Colorado Infantry, Company D. The flag and its bearer advanced to New Mexico and are believed to have participated in the Battle of Glorieta Pass from March 26 to 28, 1862. The condition of the flag when it was donated in 1963 to History Colorado led to an initial conservation effort. Perhaps in error, or with the intention to present the flag vertically, the flag was stitched down to a backing with the canton on the right rather than the left. That 1963 choice sealed the fate of the flag for future presentations. Because so much of the blue fabric was lost, contemporary conservation efforts required the presentation to remain in this position. Even so, the piece carries the story of the soldiers who marched behind its waving stripes into and back out of New Mexico. Objects like this iconic flag, unlike the men who gripped it during battle, remain. – M. D.

There are some wounds that time doesn’t heal. One of the pitfalls in the study of history is the marking of anniversaries— those convenient, round-number anniversaries—at 50, 75, 100, 150 years, and on and on. We have just passed the 150-year “celebration” of the end of the Civil War. Supposedly, we won’t have to think about the Civil War for another 25 or 50 years.

But that’s not how it works. I’ve heard it said that in some places “they’re still fighting the Civil War”—as if the rest of us are smarter or better or the war is something that just needs to be gotten over. But my experience working on Fading Memories: Echoes of the Civil War has shown me that the opposite is true. The Civil War is the war that won’t go away, and rather than getting over it we might all benefit from taking the time to examine the issues, read the newspapers of the time, stare into the faces of those for whom the Civil War was an unimaginable tragedy. It is for each American to look into that old cigar box of history to examine the talismans that have been left to us. Each of the tens of thousands of books written in those years has become an artifact of the war, and our small exhibit becomes part of its telling. Visitors may not learn anything new about how the war was won or lost, about who was right or who was wrong. No one has yet spoken the final word on the tragic, bewildering enormity of the Civil War. And that is the point— this show is about the 150 years that have not healed the wounds of war. – T. L.