Topics > My Perspective > On (Not) Leaving Home 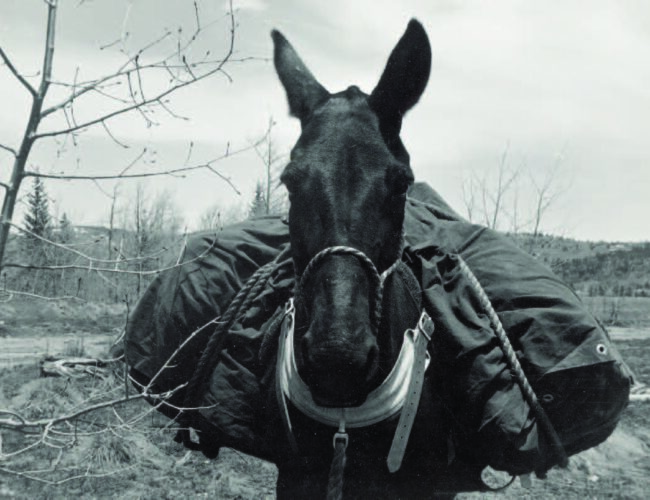 It’s been over forty years since I and my wife at the time, newly married, bought four Mexican mules and, riding two and packing two, traveled west from Taos to find a home somewhere in that general direction.

We had Utah in mind, but we didn’t really know where we were going, and we were ignorant of what it took to ride cross country in an age of highways, fences, and private property. The important thing was to be going someplace else; it didn’t really matter where.

These mules had spent all of their lives punching cattle in the state of Chihuahua and had lately been displaced in a way that is unimaginable to most people—equivalent to being kidnapped, blindfolded, and flown to a foreign country for interrogation. Our mules had been smuggled across the international border after we put in our order with a horse trader. Their idea of home was grounded in the last place they had been fed and watered, whereas ours was based on an image of domestic happiness—a little house in the shade of a cottonwood, with chickens scratching in the yard. When we reached the old bridge at the bottom of the Rio Grande gorge, our mules put up a fight, finally toe-dancing across as if the bridge were paved with hot coals. They may have been driven across the Rio Grande in a stock trailer when they were delivered from Chihuahua, or convinced to ford the river, but until that day, they may never have walked across a for-real bridge.

Two months later, in the San Juan Mountains of Colorado, our mules absolutely refused to travel through snow, something else they’d never known in Mexico. Then one of them ran off, choosing early retirement over the endless drudgery of hauling us and our gear to nowhere in particular. Who could really blame her? After a cowboy couple grubstaked us at their summer camp and found our renegade mule, we realized we were feeling homesick for New Mexico. Our cowboy friends took the runaway in payment for hauling us and the other three mules (plus a donkey named Lucinda) back to New Mexico. Eventually we found that place by the river with the cottonwoods and the chickens, only we had to build it first.

Experts say that when you’re lost in the wilderness, cold and hungry and frightened, even before making a fire or finding something to eat or trying to find help, the first thing to do is make some kind of shelter that you can call home, even if just a pile of branches to crawl under. This recipe for survival implies that the mere idea of home, so vital to one’s sense of well-being, can be enough to save one’s life. It took leaving New Mexico in what now seems like a hopeless attempt to find a home in some other state (and some other state of being) to discover where I really wanted to be, which at the time took precedence over who and what I wanted to be. Where I wanted to be was here. All else would follow from that—and, as it turned out, it did.

Forty-plus years later, I still don’t have much inclination to go anywhere else, either inside the state or out. It took most of that time for me to finally visit Hopi for the Bean Dance, which, after all, was in Arizona. My idea of an outing is to take the bus to the library in downtown Santa Fe because the bus and especially the people who ride the bus change one’s perspective, and everyone needs some perspective changing now and then. After fifteen years as an editor with the Office of Archaeological Studies, I needed a break and cajoled my employer into giving me a year off without pay so I could go live in Southeast Asia, having never lived in a foreign country before—something I recommend as a surefire perspective changer, a way of reminding oneself that New Mexico, for all its beauty and culture, and all its hominess, is not the center of the universe.

Before going to Asia I entertained the notion, without saying anything about it to my boss, of staying there forever, maybe teaching English to get by. Especially after the Asian financial crisis of the 1990s, I could have lived better over there by renting out my house in Santa Fe than I could live in the American provinces on a state worker’s income. This notion persisted until I got to know some of the other men who were living the expatriate dream and saw how aimless they had become, how apparently homeless.

The place one chooses for a home can have more to do with a sense of belonging than with necessity. I grew up in New York City, but I feel like a tourist there now. One time I asked a friend why he thought the street people of Chicago, for example, chose to winter there and risk freezing to death, as some do every year, rather than moving to a warmer place like Tucson or Los Angeles. “Because that’s where their people are,” he answered. “That’s where they feel at home.”

The longer one stays away from New Mexico, the greater one’s joy in returning. After breathing tropical air during those months in Thailand, Laos, and Myanmar, the air of New Mexico, although nothing like what it had been forty years earlier, was the sweetest confirmation that I’d come home. Just to breathe here seemed a thing worth doing, the realization of an unspoken prophecy. What’s more, going away and coming back allowed me to appreciate my humdrum job as I never had before.

In Buddhist culture, the ordination of a monk is called “homeleaving.” Not only does the new monk leave behind his physical home, including friends and family, he vows to remain psychologically homeless, to “take refuge” in the teachings alone and the community that lives by them. Ideally, that kind of dedication leads to a more complete and authentic involvement in the people and affairs of the world, rather than a distancing from them, so that by leaving home, he comes home for the first time.

It’s much too easy for me, a home-loving man, to stay home, hermitlike, and confine my travels to this desk and the backyard. The challenge is to go on discovering in the midst of familiarity, to find something to appreciate even in the noise of the compressor from the used car lot on the other side of the wall, which is much harder to love than, for example, the musical clang of the Railrunner in early morning, carrying state workers to the halls of our bureaucracy. Part of the pleasure of that clang is its reminder that since retiring, unlike the people on the train, I can choose to roll over and go back to sleep.

Love of home notwithstanding, it’s great to get out and look, if only because it enables you to turn around and go back where you came from. On New Year’s Day I and my companion traveled all the way to the south side of town to walk in the sun at the Cieneguilla Petroglyph Site. The Office of Archaeological Studies almost never sent me into “the field”—places where people, ancient and not so ancient, left behind evidence that they had made a home there once, or at least passed through on their way to someplace homier. My place at OAS was in front of a computer screen, not a bad place to be, especially when my colleagues the archaeologists were bucking a frigid wind in Springer or on their knees under a withering sun at the Spaceport, digging up more numbers to crunch. More often, though, I envied them their license to go just about anywhere within our political boundaries and see places and things that most of us never get to see.

I still get the hankering, now and again, to get up and go, although the appeal of suffering in unknown lands has diminished considerably since those long-ago days with the mules. We’re planning a trip to Europe this summer, and I’m already starting to get excited about coming back. n

Tom Ireland’s most recent book is The Man Who Gave His Wife Away (Tres Chicas). Two of his stories were published in Best American Travel Writing.