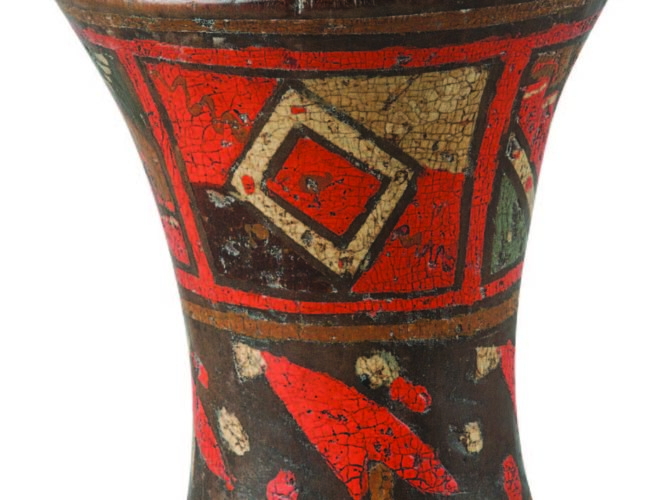 Kero. Peru, seventeenth–eighteenth century. Wood, plant resin, pigments (including cochineal), 3 × 3. in. Private collection. On exhibit in The Red That Colored the World. Photograph by Blair Clark.

Enter the Museum of International Folk Art exhibition The Red That Colored the World and you see red everywhere: in paintings, clothes, saddle blankets, altar cloths, and furniture. But as you drink in these glorious hues—pigeon blood, ruby, coral—how do you know that you are seeing cochineal, the red dye extracted from the female cochineal bug?

Even a trained eye, familiar with the range of colors that this dye produces, cannot be sure that an intriguing red comes from cochineal and not from, say, vermilion (natural cinnabar or man-made mercuric sulphide), or madder (alizarin, from the plant Rubia tinctorum), or kermes or lac (respectively, dyes derived from insects of the genus Kermes and from the resin—shellac—secreted by the female lac bug, Kerria lacca).

My life with red began about three and a half years ago, when the curators of Red asked me to document, sample, and analyze objects in the collections of the Museum of International Folk Art and their partner museums to determine which ones were colored with red derived from cochineal. Conservators are frequently consulted early in the planning of an exhibition, but the questions often have to do with safely putting fragile objects on display: can a centuries-old map withstand the light of a gallery for several years? Can a fragile textile be supported for exhibition with a backing? How brightly should old silver be polished? What kind of temperature-controlled case can be constructed to hold an object borrowed from an institution in a much damper climate than ours, so that the piece isn’t shocked by humidity variations? Conservators help curators decide what objects can withstand the rigors of exhibition, what reversible repairs or restoration might be done to objects, and how to safely display them. The challenge with Red was to determine what objects actually included cochineal. This project has led me to analyze over 800 samples from art works and hundreds of standards (comparison samples) and to document over 250 works of art, many of which are now on view in Red.

At the outset of this effort, our conservation department did not have the ability to do this particular kind of very sophisticated analysis. However, we urgently needed to determine if cochineal was in a pigment or dye, and I reached out to several conservation scientists for assistance. I spent time at the Metropolitan Museum of Art with Marco Leona looking at Raman spectrometry, and at the Museum of Fine Arts in Boston with Dr. Richard Newman, an expert in high-performance liquid chromatography (HPLC). These conservation scientists generously analyzed some samples for us. But our curators’ list of artifacts grew, and with each success more and more artwork was added.

The analysis process is costly and time-consuming. This testing is not the sort in which you can stick an object in a machine and get an answer in five minutes. I realized that we needed the capacity to perform this work here in New Mexico. And so I set about building an HPLC system with all the other necessary equipment such as centrifuges and controlled-drying apparatus. Throughout this project I continued to refine our equipment and testing protocols to be able to work with more accuracy and with smaller and smaller samples. After all, we were on the hunt to identify a material often present only in nanogram quantities in our already small sample.

Once as small a sample as can be taken and still be analyzable is collected from a work of art, it is dissolved, or if not dissolved, then leached of its principal components in a very special and powerful solvent mix. Then it is centrifuged to separate still-solid bits from the liquid, and about 20–30 microliters—about one-fiftieth or one one-hundredth of a teardrop—is injected into the HPLC unit.

The HPLC system is a complex and sophisticated collection of precision machines using ultra-pure solvents to force a tiny amount of a sample solution through a separating column at high pressure (up to more than 5,000 lbs per square inch) and finally through a diode array detector. This instrument not only records how long each now-separate component of the sample took to pass through the column but, using various parts of the ultraviolet and visible light spectrums, captures a spectrographic fingerprint for each of those components.

Each HPLC analysis run is composed of the unknown samples from the art works and known standards—pure examples of the materials we might expect to find, acquired for comparison purposes. For cochineal the standard is carminic acid, the principal component of the cochineal dye colorant. I chose to also include standards for alizarin and lac to aid in identifying complex mixtures of pigments or dyes.

The resulting chromatogram, which is the name for the chart of column exit times (elution) for each component of the sample, shows the presence of the carminic acid spike from cochineal if it was present in the original sample.

There were many challenges along the way. For starters: taking the sample. Conservators don’t like to put holes in things; we are trained to fix holes and do complete restorations of artworks. So we had to refine the process to enable us to use very, very small bits and still get reliable results. For paints, we wanted to take samples no larger than the period at the end of this sentence; for textiles, we wanted to use fibers no more than two or three millimeters long, but that is still not a process to take lightly.

For several centuries, Western artists felt that you could not get a proper flesh tone without using cochineal. It could be used as a translucent glaze on top of silver or gold, or as blush on the cheek. But when used in this manner, the powerful pigment is present in very, very small amounts—actually, nanogram amounts. Occasionally, when enthusiastically asked to scientifically determine whether the red in the blush on a painted figure’s face derived from cochineal, I’d ask the curator, “Which cheek do you want me to take?” No modern conservator will destructively sample a work of art or do so when there is little or no chance of success in identifying the unknown.

Yes, there were times that we couldn’t take a sample.

It is important to remember that even in instances when we were not able to verify the presence of cochineal from our samples, we cannot rule it out. It may have been there, but in too small a quantity for us to identify. And it was always possible that the particular sample of a pigment that we took did not contain cochineal, although cochineal could be present elsewhere in the piece. Artists might use vermilion to paint the major sections of a painting, and when that dried, they would come back with cochineal to put in the drapery of curtains and robes. It was certainly used in this manner in the Ex Voto to St. Anthony, lent by the Museum of Spanish Colonial Art and on view in the exhibition.

Textiles presented other interesting challenges. Sometimes the dyers used pure colors. But often textile dyers will mix dyes or re-dye, as painters mix color, and so you can wind up with a very complex mix that does not always fully and clearly separate in the HPLC machine. When this occurs, the spectrographic curve of each signal spike in the chromatogram is examined to look for the characteristic carminic acid curve.

And of course, a completed textile work can be a mix of different kinds of fibers. Cochineal will only adhere to protein fibers such as silk, hair, and wool. In textile works, cotton was often used as the main fabric, and wool, or silk or hair from camelids (alpacas, guanacos, llamas, and especially vicuñas) dyed with cochineal might be used for the embroidery. Every artifact has a story—what it is made of, how it is made, and how its materials such as dyed fibers and paint pigments were made. These and more are pieces in the jigsaw puzzle that is the story of the artwork. It is gratifying to be able to add this information to the museum records and to be able to tell the artifact’s story to visitors.

Among the many paintings, furnishings, and textiles we investigated for the presence of cochineal-derived reds are a group of six keros belonging to a private collector who lent them to us for study and for inclusion in the exhibit. Keros are ceremonial drinking vessels once widely used by the Incas in Peru. Often made from wood, as these were, they are found in various sizes and shapes; the waisted cup design is commonly found. The earlier keros, those produced before the Spanish Colonial period (the seventeenth through the nineteenth centuries), were unpainted but incised with geometric designs. During the Spanish Colonial era, keros evolved into beautifully decorated objects.

Previously, private funding support allowed us to purchase a computer-controlled object turntable, scanner, camera, and software that enabled us to take high-definition “strip” or “rollout” images. This is the digital-photography equivalent of Sir Flinders Petrie rolling Babylonian cylinder seals into soft clay, giving a compete view in one plane of the cylinder inscription. Scholars can then see the relationship of each portion of the image to the whole, and better grasp the design and execution decisions made by the artist. In our case we mapped the sample sites onto the rollout image of each kero, allowing curators and researchers to understand how the elaborate designs were conceived and constructed.

Was cochineal the only contributor to the color red in these keros? Getting the whole story often requires complementary analysis techniques. While HPLC identifies organic compounds, X-ray fluorescence can identify the mineral elements present in a pigment. X-ray fluorescence results show that other elements are also present in the keros: mercury, lead, and iron. Mercury is present in the form of vermilion or cinnabar; lead in the form of red lead; and iron as red iron earth, or hematite. All of these elements representing potential pigments give some indication of what the artist’s palette was like. The artist would have combined these materials to arrive at the desired hue.

The story of these keros is gradually filling out as the physical evidence is uncovered by applied science and museum conservation investigation. Is their story complete? Not necessarily. More pigments and binders will be identified. More evidence of how these wonderful ritual maize-beer-drinking vessels were created and decorated will be found. Perhaps the investigative methods of tomorrow will finally allow us to recreate the original maize beer by examining any remains of the beverage within the cups.

With the addition of the HPLC laboratory to our Raman, FT-IR, UV-visible spectrometers, and X-ray fluorescence, we at Museums of New Mexico–Conservation are well on our way to setting up the Southwest Center for Research Excellence, funded in large part by the Dr. Don Pierce fund for scientific research. So much of modern art conservation begins with a good hunt for the hidden truth and the true story of the art. As in the adventures of that famous sleuth of Sir Arthur Conan Doyle’s, the “game” is truly “afoot.” n

Mark MacKenzie is chief conservator and director of MNM-Conservation, a unit of the Museum Resources Division of the New Mexico Department of Cultural Affairs.