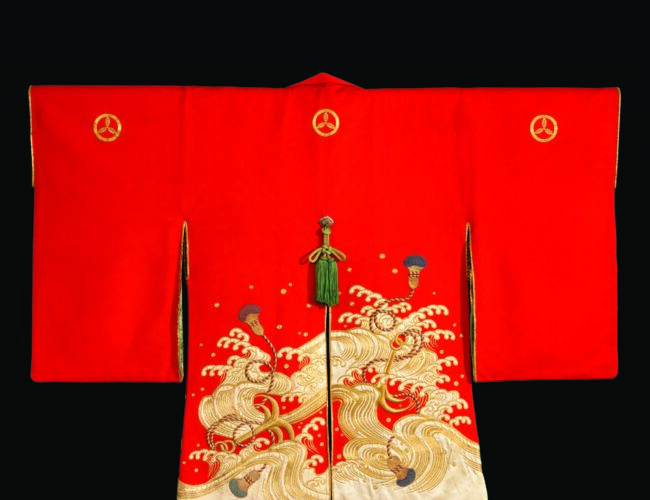 Firefighter’s ceremonial coat (kajibanten), Japan, eighteenth– nineteenth century, Edo period. This cochineal-dyed cape was likely only used for ceremonial purposes. A sturdier coat, often made of leather, would be worn during firefighting. Wood with gold- and silk-thread embroidery and appliqué, 38 × 48 in. John C. Weber Collection. Photograph by John Bigelow Taylor.

The spectacular exhibition at the Museum of International Folk Art, The Red That Colored the World, has been years in the planning and is only here for the summer. You should not miss it.

Curators Barbara Anderson, Nicolasa Chávez, and Carmella Padilla have assembled from around the world diverse works of art, fashion, and material culture which have at least one thing in common: their color derives from a little bug. For this issue, regular contributor Les Daly interviewed the curators, and writes about the history of cochineal dye and some of the treasures that have made their way to Santa Fe.

Red at Folk Art now joins turquoise at the Museum of Indian Arts and Culture in Turquoise, Water, Sky: The Stone and Its Meaning, to anchor Santa Fe’s Summer of Color, a celebration that radiates from Museum Hill across the city. For this issue, Cindra Kline continues her exploration of Santo Domingo Depression-era jewelry, explaining the sources of its more surprising colors. Color also abounds in Indian Country, an exhibition of the work of David Bradley, whom curator Valerie K. Verzuh calls a “postmodern trickster.” The New Mexico Museum of Art—where color always flourishes—presents Colors of the Southwest. At the New Mexico History Museum and Palace of the Governors, it is Adobe Summer, with many public events. In this issue Kate Nelson heralds “the most ubiquitous color in New Mexico: mud.”

While El Palacio traditionally focuses on the exhibitions and programs of the Museum of New Mexico, several partners in the Summer of Color contribute pieces on the colors that are featured in their exhibitions and programs this summer: indigo and cobalt at the Museum of Spanish Colonial Art, purple at El Rancho de las Golondrinas, and silver at the Wheelwright Museum of the American Indian.

Two of our regular columnists examine the use of color in media where we do not always expect it: Daniel Kosharek writes about early hand-colored photographs, and Penelope Hunter-Stiebel discusses a brilliantly colored piece of sculpture. And there is color elsewhere throughout the issue, in Morgan Farley’s poem, and Laura Marcus Green’s story of an indigo quilt, and in Mark MacKenzie’s tale of high-science investigation of the traces of cochineal in works of art.

But we have our sobering notes. Three curators at the History Museum teamed up to write about their Civil War exhibition, mounted in coordination with the Santa Fe Opera’s premiere of Cold Mountain; and Thomas Leech of the Palace Press writes about two of the most chilling pieces of paper to pass through his hands in his years as a printer and curator.

And finally, a personal note. This is my last letter as editor of El Palacio. After five plus years and twenty issues of El Palacio, I am ready to cede the chair to someone else. It has been a privilege to be part of the long tradition of this magazine and to work with our talented staff and writers, and with our museums and programs, and our readers. Every day I learn something new and see something amazing, and I’m going to miss those daily surprises, though I look forward to reading about them in these pages. I am thrilled that our longtime copy editor and occasional contributor, Tom Ireland, is going to step in as interim editor for a few issues. Tom was an editor at the Office of Archaeological Studies for many years, and is the author of four books. He contributes to this issue a memoir of the time, many years ago, when he almost left New Mexico for good, and tells us how he came back, a return for which we are thankful. He is now at work on the fall El Palacio, which will be a special issue in conjunction with All Trails Lead to Santa Fe, a conference on the three trails which converge here: El Camino Real, the Old Spanish Trail, and the Old Santa Fe Trail. The conference is based at the Santa Fe Community Convention Center from September 17 to 20, with lectures, field trips, and new research in El Palacio. Happy trails to all!