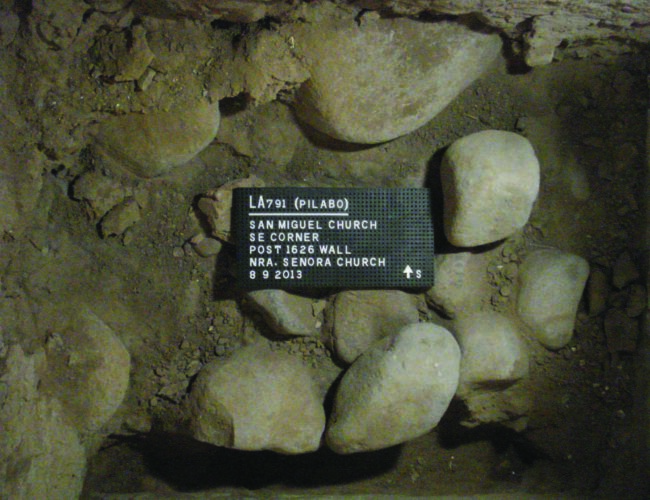 The base wall of Nuestra Señora del Socorro Church, ca. 1626, under the southeast corner of San Miguel Church. Photograph courtesy of the author.

One spring day in 1626, Fray Alonso de Benavides, head of all Franciscan missionaries in New Mexico, stood in the plaza of a pueblo at the foot of a small mountain range just west of the Rio Grande.

Having come to convert the pueblo’s residents, he faced a dilemma: there was no audience. “The devil,” he would later recall, “had persuaded [the natives] that if a friar only looked at them, they would become Christians, and if this happened all would go wrong with them. Because of this, they all hid or hurried away. . . . The first thing I did, as in all the other conversions, was to conjure and banish the devil from this place through the exorcism of the church.”

With this ominous episode, the Piro pueblo of Pilabó enters colonial history. In the accounts of religious and civil officials, the Native name, Pilabó, soon gave way to Socorro, derived from the mission of Nuestra Señora del Socorro, whose foundation Benavides laid in 1626.

Fray Alonso’s appearance at Pilabó capped eighty years of mostly sporadic contacts between Spaniards and the Puebloan group they would call, by the 1620s, “los Piros.” Members of the Coronado expedition visited Piro pueblos along the Rio Grande in 1541– 42. Later Spanish parties came up the Rio Grande, traversing the length of Piro territory. Most prominent among these, in the summer of 1598, was Juan de Oñate’s colonizing caravan. Oñate-period documents contain the earliest renderings of Piro pueblo names, such as “Pilopue,” clearly a variant spelling of Pilabó. The same documents also provide Spanish versions (“Atzigues,” “Tziguis”) of the autonym “A’zi-em” (“[the] people”), still in use among Piro descendants today.

Alonso de Benavides’s Pilabó enterprise marks the beginning of a permanent Spanish presence among the Piros. His writings describe how he established himself among the wary natives. In one episode, he converted an old “chief” and wrote that the chief had “a house . . . given to me in which to live and gave me some advice as to how I ought to proceed to convert the people of this nation.” It is difficult to evaluate such statements from a distance of 400 years. As the most accessible period source on the Piros, Benavides’s claims of the beneficial role of the mission system and willing submission of the Piros have shaped modern perceptions of Piro–Spanish relations. Yet other documents paint a different picture. As early as 1599, Spaniards were attacking Piro-speaking pueblos in the Salinas area. The Piro pueblos of Abó and Tenabó were labeled “hostile” well into the 1620s. And during the mid- 1600s, Piros in the Rio Grande Valley and Salinas Basin organized at least three uprisings. All were suppressed by Spanish arms.

By 1675 only four of what may once have been up to twenty Piro pueblos still existed. In August 1680, as Spanish refugees from the Pueblo Revolt gathered at Socorro, that pueblo’s residents planned one last-ditch attack, but the plan was betrayed. In response, the Spaniards rounded up some 300 Piros and took them to El Paso. Even there, the displaced Piros would continue to foment rebellion well into the 1700s. For Pilabó/Socorro, however, the end came in 1681, when Governor Antonio de Otermín ordered his soldiers to burn down the pueblo.

Referred to as “the principal pueblo of the Piro nation” during the 1600s, Pilabó was a sizable settlement. Even in its ruined state, it remained a landmark for travelers on the Camino Real long after 1681. As Hispanic settlers moved back to Socorro in the early 1800s, they established a new plaza and built the current church of San Miguel. Whether the layout of the old pueblo shaped this resettlement is unknown. Pilabó’s ruins were doubtless still visible in the early 1800s, though no description of them exists. By 1882, when Adolph Bandelier visited Socorro, all that remained on the ground were pottery sherds and stone tools scattered over a wide area between San Miguel Church and the town plaza. Since then, more than 130 years of development have further dispersed artifacts. Nevertheless, local lore has long placed the pueblo mainly west of San Miguel in an area that has seen much construction and grading. Just beyond this leveled area, some low adobe mounds survive that are popularly associated with the pueblo. In size, shape, and surface artifacts, however, they do not resemble anything other than collapsed nineteenth- and twentieth-century adobe structures.

In 2012 I began began trying to locate Pilabó Pueblo and experience a dose of urban archaeology. The project follows a decade of research at the likely site of Teypana, the first pueblo named Socorro by Oñate’s colonists in 1598. Interestingly, the archaeological evidence and historical context strongly suggest that Teypana’s residents moved or were moved to Pilabó under Spanish supervision sometime after the establishment of the Nuestra Señora mission. The current Pilabó Project is partly under the umbrella of Jornada Research Institute’s Piro Archaeology Program, which also includes a long-term research project at Tzelaqui (Sevilleta) Pueblo. Prior to 2012, the only structural evidence for Pilabó and its mission was a short wall section uncovered in the 1970s under the southeast corner of San Miguel Church. The wall was then interpreted as being part of the base of the church of Nuestra Señora, built soon after Father Benavides founded the mission of the same name. During renovations in 2013, I had the opportunity to reexamine the wall face, revealing a corner and ceramics dating from ca. 1450 to 1680. The wall’s position suggests that when they constructed their new church in the early 1800s, San Miguel’s builders utilized the footprint of the old Nuestra Señora Church.

Since Franciscan missions in New Mexico were usually placed on the edges of pueblos, the question now was whether Nuestra Señora Church had been built on the north, east, south, or west side of Pilabó Pueblo. Using San Miguel’s nave as a “fix point,” I analyzed street plans and photographs from the 1880s through the 1940s. The earliest images show open fields north and west of the church, which makes it unlikely that major buildings existed in that area. Still, without subsurface data I could not rule out the possibility that smaller structures or features might be buried there. Such data were collected in test excavations and auger probes in 2013 and via a ground-penetrating radar (GPR) survey in 2014. The efforts focused on the leveled western and northwestern edge of the San Miguel property. They revealed no evidence of buried structures or features from the 1600s or earlier.

While these investigations eliminated San Miguel’s western and northern peripheries as possible pueblo locations, additional work southeast of San Miguel unearthed the first clear remains of Pilabó. In 2013 we excavated several 1-by-1-m test units in a parking lot east of the San Miguel parish offices. At 80 to 83 cm (about 2 feet, 8 inches) below the gravel surface, two test units hit the edges of a large, circular pit feature. The pit contained ceramics from the 1400s through 1600s, burned adobe, and animal bones. Significantly, it lacked the metal, glass, and other nineteenth- and twentieth-century debris present in the upper levels of all test units. Also, what appeared to be an old, compacted surface ran right up to the pit’s edges.

Based on the appearance of the pit margins, we first thought that we had come upon a plaza surface, but subsequent excavations proved otherwise. In 2014 we uncovered another pit with pre-1680 material. A radiocarbon sample from this second feature yielded a date range of AD 1402–1622, which reflects the age of the ceramics found in the pit. Just as importantly, we noticed that a building foundation truncated the pit at the same depth at which we had discovered the large circular pit in 2013. It became obvious that between 1850 and 1890 or thereabouts, someone had dug a base for a rectangular building at least 2½ feet into the ground as it was at the time. This had removed all remains relating to the pueblo except the lower portions of the two deep pits encountered so far.

Further evidence of the damage came with the discovery, in 2014, of a partly disturbed adobe floor and the remains of an adobe wall. Located 10 m (30 feet) north of the two pit features described above, the top of the wall was just inches and the floor about a foot below the parking lot surface. A sample of burned roofing material resting against the wall was radiocarbon-dated to AD 1437–1635. Since ceramics and metal artifacts on the floor suggested a seventeenth-century date, it is possible that old beam fragments had caused the whole sample to date earlier than it actually was. In 2013 I had noted a similar burn layer under one of the parish office rooms just south of San Miguel. With floorboards removed and new trenches dug for utility lines, there was just enough time to draw a profile of that layer. The position and appearance of the two burn layers, and the artifacts found in them, make it tempting to associate them with Otermín’s destruction of Pilabó in 1681, although this conclusion is still open to conjecture.

In addition to these and other excavations, we were able to run the GPR over the gravel parking lot and an adjacent driveway. The GPR readings indicate more buried walls near the documented section of adobe wall and confirm the nineteenth-century foundation disturbance around the two pit features. They also reveal a depression with a size and shape reminiscent of a buried kiva. ¡Bienvenido, Pilabó! n For their interest in and support of this project, the author would like to thank Father Andrew Pavlak of San Miguel Church, Richard Sims, Tom O’Laughlin, Brenda Wilkinson, David Greenwald, Tiffany Osburn, Mike Marshall, and the many volunteers who came out to join in the search for Pilabó Pueblo.

Michael Bletzer is an archaeologist with Four Corners Research and a research associate with Jornada Research Institute. He has worked on archaeological projects in Europe, Central America, and the US Southwest. Since 2000 his research has focused on the Piro area of south-central New Mexico.