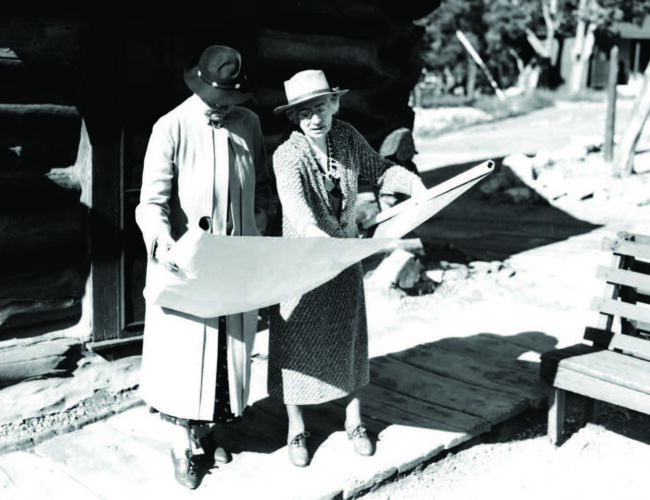 BY MEREDITH DAVIDSON AND KATE NELSON

While we developed Setting the Standard: The Fred Harvey Company and Its Legacy, the New Mexico History Museum’s addition to its main exhibit, Telling New Mexico: Stories from Then and Now, Colter’s influence seeped into our souls.

There she was in a jackrabbit ashtray, a hand-painted blanket box, and photographs of lodgings like Albuquerque’s lamentably demolished Alvarado Hotel and Indian Building. We could visit La Fonda on the Santa Fe Plaza and see echoes of her work. We knew that, in geographic reach, her influence stretched along a train-track trail from Chicago to Los Angeles. Today, alas, few of her gems stand. Earlier this year, we decided to see at least a few of them. A friend had snagged a coveted reservation at the bottom of the Grand Canyon, home of Colter’s Phantom Ranch. After a few practice hikes, we bundled our boots, poles, and packs into a car and headed west.

In decades past, a traveler could have stepped off a train at the Castaneda Hotel in Las Vegas,

Our own trek offered far slimmer options. Interstate 40 soon bored us enough that we hopped off onto old Route 66, the “trail” that once drew travelers away from the tracks into kitschy, low-budget motels. Now even that option has faded. We drove past the ghostly remnants of Paradise Acres, Arrow Head Lodge, and the Blue Spruce Lodge, still boasting its newfangled “steam heat.” On a slow drive through Gallup, we felt the loss of El Navajo, which fell in 1957, taking with it murals painted by celebrated Hopi artist Fred Kabotie. A 1923 Colter classic, it’s now just one of the lost legacies still mourned by “Fredheads,” people like us who hunt for a slower, more gracious style of hospitality.

A night at the Twin Arrows Resort, east of Flagstaff, Arizona, revealed a new incarnation of American lodging: tribal casino-hotels with an upscale sterility and slot machines seemingly named after exotic dancers. Kitty Glitter. Pearl Dynasty. Ruby Star. From our air-conditioned windows, we gazed upon stadium-sized parking lots. Despite the promise of a sleep-in day, we rose early and slipped out, eager for a first glimpse of the Grand Canyon.

Within hours, we had paid our fee and snagged a miraculous parking spot smack-dab next to Bright Angel Lodge, redesigned by Colter in the 1930s. Inside its lobby, a massive fireplace greeted us. Colter had curated its layers of stonework to mimic the canyon’s geological layers. Right behind it stood the Bright Angel History Room.

Good museum geeks, we headed in to check out its displays on Fred and Mary, soon finding ourselves nose-to-vitrine, entranced by Mimbreño china, classic Harvey menus, and an Indian Detour courier uniform. We’d rather not admit how long it took us to notice, beyond the grandly framed window, the attraction that everyone else came to see.

The canyon’s gasp-inducing wow-ness hit us as fully as the Fred Harvey Company knew it would hit travelers in 1905, when the magnificent El Tovar hotel was built. By then, the AT&SF had been carrying travelers on a spur line from Williams, Arizona, for four years. Designed by architect Charles Whittlesey with a nod to Swiss chalet stylings, the hotel was, wrote Hotel Monthly, “the most expensively constructed and appointed log house in America.” Besides a large dining room, barbershop, solarium, and art galleries, it had its own dairy herd to ensure visitors had the freshest milk.

Next door, Colter’s Hopi House opened two weeks before El Tovar’s debut. It was the onetime schoolteacher’s first venture beyond interior design and into architecture. She modeled it on Old Oraibi, an ancient Hopi village. The multistoried, pseudo– living museum bore an intentionally weathered appearance. Hopi artisans were once commissioned to live on-site, create artwork, and market it to tourists. Stepping inside, we noted tiny doors and cockeyed adobe windows, a subtle Navajo rug painted on the floor, and faded murals of katsinas.

Jon Streit, general manager of Xanterra, the company that owns the Fred Harvey name and runs the canyon’s hotels and shops, pointed out that workers were reversing a 1995 fix that was intended to correct a perceived error in Colter’s design. “The modern thing to do then was use metal to protect the adobe on the parapet walls,” he said. “But that ended up rotting them. We’re going back to Mary Colter’s original design from 1905.”

Ambling along the South Rim, we poked our heads into Colter’s Lookout Studio, where other repairs were under way. A stonemason explained that the crew studied historic photographs to ensure that each stone went precisely where Colter once demanded that it go. We wondered whether her spirit—nagging and exacting—hovered over his shoulder, ever protective of her work.

Other architectural gems called to us, but we had to ignore them. Nine miles of trail dropping 4,380 feet stood in the way.

Scholars aren’t sure how Colter made her way down the canyon. She could have ridden a mule on Bright Angel Trail. Possibly, she hiked it, the way we did. Either way, she saw towering cliffs, challenging switchbacks, and the verdant beauty of Indian Gardens, a popular midway rest stop. Quite likely, she also looked back, as we did, and worried how hard it might be coming back out.

Around hour six, we turned a bend and saw a raging Colorado River, green with winter melt-off. Soon, a long bridge carried us to the edge of Phantom Ranch, a collection of low-slung log cabins curled around a cantina, where weary hikers sipped lemonade and beer. A sprawling fig tree mid-camp bore testimony to an orchard that once refreshed travelers at the original David Rust Camp. In 1922 the Harvey Company asked Colter to redesign the camp in what became the chain’s most rugged lodging. Colter drew on the history of the area and the spirit of the outdoors experience with designs that led to an accepted architectural style known as National Park Service rustic, or “Parkitecture.”

The instant popularity of her five buildings inspired even more cabins and encouraged even more travelers to see as much of the canyon as possible. During the Civilian Conservation Corps era, a swimming pool was added, along with a telephone line that provided rare contact with the upland world.

Our bodies sore, we slowed down, the way Harvey intended. For two days, we dipped our feet into the cold water of Bright Angel Creek. We got to know other travelers over heaping bowls of hiker stew. Rangers taught us about condors, snakes, and infamous river rafters. We indulged the sense of being at summer camp. The morning of day three, a predawn knock at our cabin door told us that breakfast was ready. We wolfed down eggs, bacon, and pancakes, shouldered our packs, and headed up a climb that seemed more fearsome than Grand.

On the way, we passed and were in turn passed by some of the friends we’d made on the bottom. Toward the top, we spied a faint set of deer pictographs high on a cliff. That evening, we saw a modern interpretation of them racing around the walls of El Tovar’s private dining room, where we enjoyed an elegant and well-earned dinner.

The next day, we stopped near the canyon’s east entrance for one of Colter’s most well-known feats of architecture. The 1932 Desert View Watchtower rises from the rim. Four stories high, its interior is bedecked by murals of katsinas, rain formations, and animals, painted by Kabotie and Fred Greer.

The crumbling, ancestral effect that Colter carefully crafted, stone by missing stone, impresses most visitors. Although it doesn’t impress every visitor, as it turned out. As we walked in, a mother marched her son out, saying, “Someone worked hard to make it look that old, so shhh.”

We stayed long enough to soak in the expansive view offered only from the top. Soon, we continued east for one last Colter treat: La Posada in Winslow, Arizona. Colter considered the sprawling hotel her masterpiece. Opened in 1930, it fairly burst with Arts and Crafts style—from hand-crafted chandeliers to leather chairs, expansive murals, and carved balusters on every staircase. Rescued from ruin by Allan Affeldt, Tina Mion, and Dan Lutzick starting in 1997, it draws an international stream of devoted Fredheads.

We found Affeldt in the Turquoise Room, where he was reviewing details for his new Las Vegas, New Mexico, properties, including the Castaneda. As we described the types of lodgings we’d seen—and the ones we wished we had seen—he shared a sense of his quixotic endeavors. “If you’re just an entrepreneur wanting to make money, a property like this doesn’t make sense,” he said. “You want a chain hotel on an exit ramp, where you’ve got built-in marketing. It costs so much to renovate a hotel like this, and it’s much more personal to operate it.”

In a video about the renovation, Affeldt talked about the competing notions of a posada. In one sense, “la posada” means the resting place, but in another, it means the journey, as in the Christmastime Las Posadas hosted by the New Mexico History Museum every year. “The posada,” he says, “is both the journey to find a place to be and the end of the journey.”

This posada was where our journey ended, but in a way, it’s also where the next one will begin. Despite our best efforts, we didn’t have time for Colter’s Hermit’s Rest. Then there’s Chicago’s Union Station—Los Angeles’s, too. Colter’s spirit still calls. A new adventure awaits.

When the Fred Harvey Company and the Atchison, Topeka and Santa Fe Railway offered Mary Colter a full-time job in 1910, the Minnesota schoolteacher had already spent eight summers working on buildings at the Grand Canyon and Albuquerque’s Alvarado Hotel. From a base in Kansas City until her retirement to Santa Fe in 1948, she took all or partial credit for buildings that include the canyon’s Desert View Watchtower, Hopi House, and Phantom Ranch; El Navajo Hotel in Gallup; La Posada in Winslow, Arizona; and Union Station in Los Angeles. She even designed the Mimbres-derived china used aboard the Super Chief.

As other architects turned toward Art Deco, Colter clung to the earlier Arts and Crafts style. It spoke to the romance of travel, the thumping heart of the Fred Harvey philosophy. She had taught basket weaving, metalwork, and pottery, so if she couldn’t find someone to do a job, she did it herself. A chain smoker who appreciated her whiskey, she could cuss out a bellhop one day, a carpenter the next. She never married, never bore children. She never met cohorts like Frank Lloyd Wright and failed to earn fame until well after her death in 1958, not far from La Fonda on the Plaza, one of her signature works.

Meredith Davidson is curator of nineteenth- and twentieth-century Southwest collections at the New Mexico History Museum/Palace of the Governors. Kate Nelson is the museum’s marketing and public-relations manager.