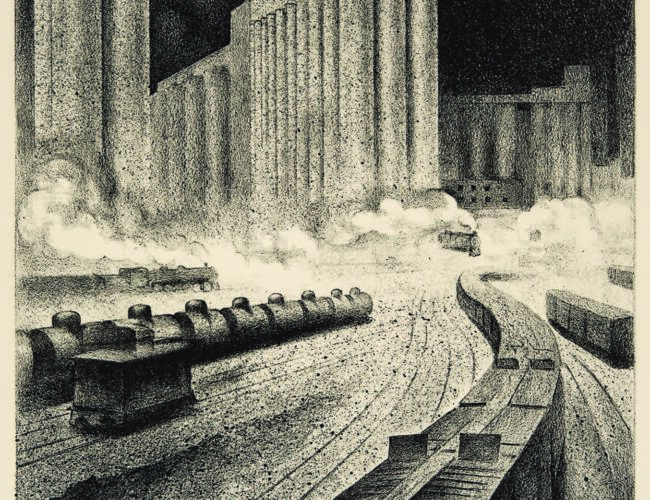 BY CARMEN VENDELIN AND KATHERINE WARE

The New Mexico Museum of Art features two shows drawn from its collection of Modernist works, with additional loans from the Georgia O’Keeffe Museum and the University of New Mexico Art Museum.

One of the best-known American Modernists is Georgia O’Keeffe. O’Keeffe In Process examines what makes an O’Keeffe artwork recognizable as an O’Keeffe. Observation of nature and the abstraction of Modernism are both central to much of her work.

In On the River, from 1964, O’Keeffe depicts the Chama River in a very abstract style, reducing it to a flat, blue stripe. This flattening is typical of Modernism, which sought to preserve the integrity of the two-dimensional picture plane rather than create the illusion of depth. The composition also suggests an aerial viewpoint; in fact, O’Keeffe flew in an airplane for the first time in 1959, giving her a fresh take on the world that she used in her work. Thereafter, many of her compositions take the perspective of a direct view from above.

Included in the exhibition are nine works by O’Keeffe from the Museum of Art, complemented by two additional paintings by the artist in An American Modernism and contextualized with other works of art and support material to tell the story of the artist’s working technique. The artworks span the artist’s career from early student portraits of family members created in 1905, to paintings executed during stays at Lake George in the late teens and first half of the twenties, to her iconic depictions of New Mexico landscapes, to her discovery of the view from the sky. Preliminary sketches and photographs will be shown alongside finished works to demonstrate the steps, the thinking, and the technical art-making process of this twentieth-century New Mexico master.

I paint what I see in America, in other words I paint the American Scene.

An American Modernism focuses on Modernist works made in the 1920s and 1930s, after the art movement was established, tracing the efforts of American artists to establish a distinctively American vision in the arts. Using many of the hallmarks of Modernism, such as abstraction, everyday subject matter, and less respected mediums such as watercolor and photography, these artists set themselves the task of unseating Paris as the art capital of the world and giving voice to their developing nation.

Central to An American Modernism are the apparently oppositional directions these artists pursued in seeking to define American art. Science and industry were highly valued, and many artists gravitated to subjects and styles that reflect their zeal for the Machine Age. In Louis Lozowick’s untitled lithograph from 1933, he composed an industrial scene, with trains coming and going in different directions against a backdrop of towering structures. The print’s black-and-white tonality and inky surface emulate the gritty quality of the landscape Lozowick celebrates.

Nature was also an important touchstone for many artists, especially those who traveled to the western United States and experienced firsthand some of the unique geographical wonders of their country. Artist Cady Wells moved from Massachusetts to northern New Mexico and often took the landscape of his new home as a subject for his virtuoso watercolors. In his untitled watercolor of 1938, Wells chose to depict nature as a dynamic, emotional force expressed in a fragmented style that recalls Cubism.