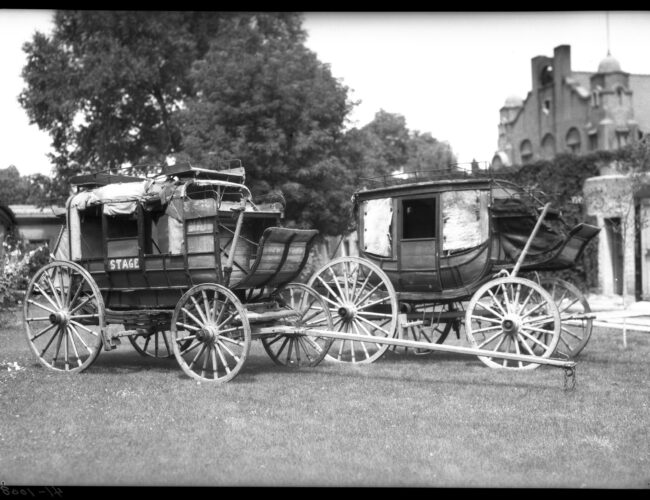 Upset about that 17-inch-wide seat on the airplane? The door is open to the “roomy and convenient” transport of yesteryear. Of course the seating allowance is 15 inches per person, and that includes the ladies’ long skirts and bustles.

“Roomy” is not the first word that comes to mind when standing before the coach in the New Mexico History Museum, which made its first run from Las Animas, Colorado, to Santa Fe in 1858. Yet this was the term used to describe the coaches of the Barlow, Sanderson & Co. mail and passenger service in a letter to the editor of the Daily New Mexican dated October 13, 1870, signed “Several Merchants of Santa Fe.” Nine passengers were meant to fit inside—three abreast, with an additional bench between to accommodate three more who did not even have the benefit of a seat back. If you wanted leg room, it was best to ride on the two topside benches and hold on for dear life or sit beside the driver and enjoy the company of one of these infamously colorful characters.

It was not a lack of comfort but cavalier changes of schedule that caused the merchants to complain of the service they otherwise credited as “new and improved” and “run on time.” As the railroad inched its way west, stage lines still functioned as the connection to western towns. For businessmen in the New Mexico territorial capital, the new rail-and-trail combination, with pickup at a railhead in Colorado and stage transport through Raton Pass down to Santa Fe, was certainly an improvement over going the whole distance from Kansas City on the Santa Fe Trail.

The dusty vehicle before you is not the Concord coach, which Barlow and Sanderson ran along routes with more forgiving terrain. The wooden pods of those relatively luxurious cabins weighed more than 2,000 pounds so could not be used in the mountains. This vehicle, indelicately called a mud wagon, has a roof of canvas stretched over wood struts, reducing the weight to a mere 800 pounds. Loaded with people, luggage, and mail sacks that could weigh 250 pounds, it had to be pulled by a team of six horses, replaced when necessary by mules. Here again, the merchants complimented Barlow, Sanderson on the excellent stock on which the company’s service depended.

Teams were changed out every ten to twenty miles in order to keep up the speed required to meet the time margin specified in the contract to carry mail. At these stops the passengers could purchase food, such as it was. Station masters on the New Mexico mountain route were known for the fresh tortillas, fish, and game they offered, in contrast to the meager fare provided elsewhere.

As the coach proceeded night and day, passengers were meant to sleep on board. The mud wagon has no springs, but despite the unpaved, rutted roads, the ride was not as bad as one might imagine. You can inspect the leather braces stretching front to back, a suspension system causing the cabin to sway more than bounce. Recounting his 1861 trip west in Roughing It, Mark Twain described his stagecoach as “a cradle on wheels.”

Rolled canvas curtains were the only protection from the elements and precious little use against snow or rain, cold or heat. On this mud wagon, you can still see the dust, which was so pervasive that gentlemen were warned against following the fashion of using grease in their hair.

Much has been made of the romanticized hazards of travel in the Old West. While the southern route of the Santa Fe Trail was susceptible to attack by Native marauders, the mountain route was subject to highwaymen in terrain where ambush was easy and the temptation of huge sums carried in commercial transfer was great. Though the outlaws were glorified in the popular press back east, stagecoach passengers must have been as apprehensive as today’s airline passengers under threat of terrorism. Crossing Raton Pass in 1867, riders on this very mud wagon had their worst fears realized in a holdup in which $60,000 was taken. The express messenger in charge of it, as well as two passengers, were shot and killed. The robbers escaped, and one of the gang, Kid Barton, went on to shoot a sheriff and two deputies before he was captured and hanged near Tucumcari.

Arthur Seligman (1873–1933), merchant, banker, Santa Fe mayor, and New Mexico governor, whose family owned the oldest mercantile business in the Southwest, established in 1852, fully appreciated the importance of a service that carried money and mail as well as passengers to and from remote New Mexico. He was also a passionate, lifelong collector who proudly recounted tales of his boyhood acquisitions. It is no surprise, then, that he purchased two Barlow, Sanderson vehicles, whose service had been discontinued in 1880. One made a spectacular appearance in the 1921 Santa Fe Fiesta, driven up to the Palace of the Governors to disgorge Seligman himself, impersonating a notorious music hall proprietor. A Seligman coach returned for the 1922 Fiesta parade, illustrating “The Commerce of the Prairies.” After Seligman’s death, his widow donated the coaches to the New Mexico Historical Society, and a ramada was constructed in the patio of the Palace of the Governors to shelter them. The acquisition of the coaches and their associated lore was the cover story of the August 1935 issue of El Palacio (39, nos. 7–9).

While the mud wagon has been moved indoors in the Palace, the Concord coach is now exhibited at Lincoln Historic Site. Still intact and spared of cosmetic restoration, the mud wagon survives as a telling witness to the western stagecoach days, the rigors, and the dust.