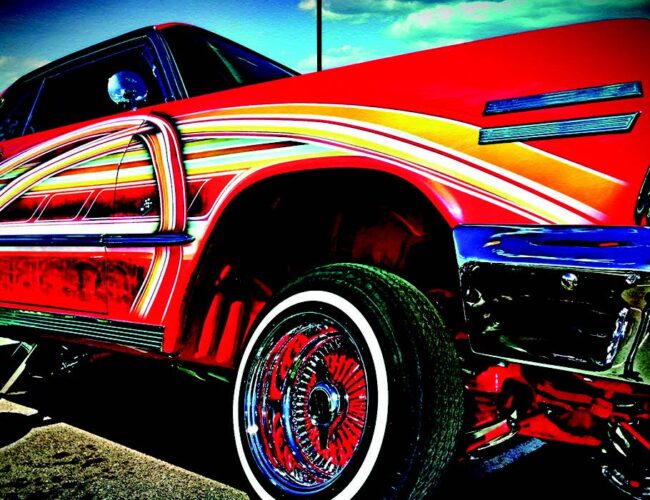 In 1977 Lowrider magazine quietly launched in San Jose, California, with the intent of giving voice to a popular Chicano lifestyle that blossomed after World War II and had yet to be righteously portrayed in print, TV, or film. Riding low and slow, or bajito y suavecito, had become a cultural identity.

I’ve long been convinced that there are two kinds of people in the world: those who drive for the purpose of getting from point A to point B, and those who drive cars to, well, drive cars. I’m in the latter category. Lowriders, Hoppers, and Hot Rods: Car Culture of Northern New Mexico is about the latter—people who express themselves through pride in their ride. And nothing says pride quite like a tricked-out lowrider.

When the idea for the exhibition was broached, I jumped at the chance to relive my youthful infatuation with cars. My research gave me an excuse to visit garages and shops and to hang out with beautiful machines and those who made them. It also put me in contact with some of the legends who loved and built these cars and, in the process, constructed their lives around them. Their cars became members of the family—doted upon, with no expense spared. I can’t count how many people pulled out a smart phone to show off photos of cars the way most people do photos of their children and pets.

At each research-driven stop in northern New Mexico, everyone had another twist for creating a distinctive ride. And everyone knew another legendary innovator we just had to meet. They opened their shop doors to reveal a world where they reigned as master craftsmen with a toolbox of skills—from mechanics to engineering, painting to upholstery, and the aesthetic sensibilities to use them all. The interior of these garages are sometimes like miniature cathedrals, where cars, instead of saints, are honored. Many have altars honoring relatives who have passed, posters of car shows they participated in, awards and trophies, photographs, and other memorabilia, all centered around one thing, their wheeled creations.

It was important to construct this exhibit in such a way as to give voice to those people working and living the lifestyle. I wanted to let them to tell their own stories unburdened by a layer of museumspeak or an outsider’s viewpoint. To accomplish this, we included extensive quotations from people in the community, not only talking about their cars, but also philosophizing on life and how their first car was a rite of passage. As Bettie Córdova, from Alcalde, said, “You want to change things every three to four years. That way, people don’t get tired of seeing your car every year with the same old thing. The car has made us closer in our marriage. We’re lowriders in love.”

To add another first-person layer, I asked fellow curator Meredith Davidson, a trained audio historian, to conduct interviews with key people and pair her interviews with Don Usner’s photographs.

Aside from car shows, lowriders have few avenues to showcase their talents. That made it a challenge to figure out how to do justice to the art form in a museum setting. Fortunately, the New Mexico History Museum has a freight elevator that can accommodate a car. This enabled us to bring two examples into the exhibit proper on the second floor of the museum: a 1983 Chevy Monte Carlo hopper (hydraulic equipped) with multicolored striping; and a rare, pristine, black and silver 1948 Chevy Fleetline. Another group of vehicles will rotate through the first-floor lobby, including a 1950 Mercury convertible that once belonged to boxing champion Johnny Tapia; hot rods; and the custom masterpiece New Mexico 505, with its spectacular Mayan/Aztec-themed murals.

Visitors enter the exhibit through a stylized garage, where audio interviews play and the mechanical elements that make vehicles run or hop are showcased. The main exhibit features over 120 photographs by thirty-one photographers captivated by the artistry of lowriding. During initial research for the exhibit, I found that virtually no institution in the West had a collection of lowrider photographs. For that reason, the images in the exhibit will become the core of a permanent collection in the Palace of the Governor Photo Archives.

While working on this exhibit I could not help reminiscing about my first car, a 1957 Chevy two-door hardtop. I can still remember that thrill and my pride of ownership. Even better? It made me the captain of several thousand pounds of metal that I could pilot almost anywhere without being fettered by parental observance.

So enjoy the exhibits, and next time you drive, think about these folks who live to wrap their hands around a steering wheel and drive their creations for the sheer joy of it. Happy motoring.