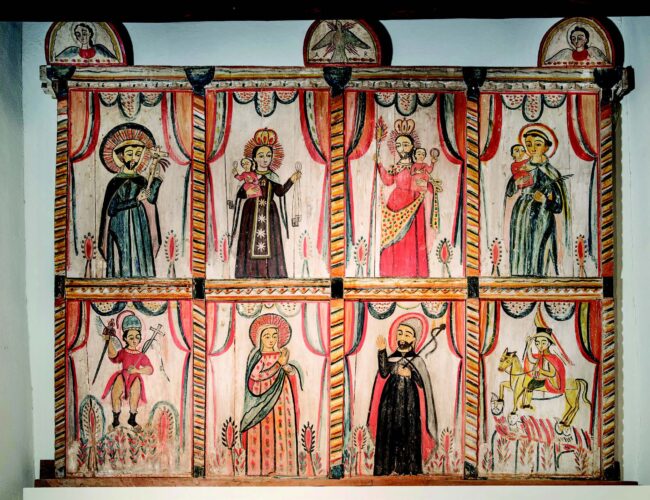 If you are as disoriented as I first was by the profusion of saints and crucifixes displayed in the Palace of the Governors, take a moment to stop at the wooden barrier and look into the world to which they belonged.

You might think that the colorful altar screen beyond was a photograph blown up to fit the recreated chapel. But such is not the case. This is the original wood construction, over 7½ feet high, made around 1840 for the chapel of the village of Llano Quemado, near Ranchos de Taos.

Isolated Hispanic farming communities sprang up in northern New Mexico in the late eighteenth and early nineteenth century. Fervent in religious feeling, they built their own small churches and held fast to local traditions. In the 1920s, the community of Llano Quemado replaced its original altar screen with one made by a local carpenter.

By this time a movement was afoot to save the Hispanic heritage that was rapidly disappearing as New Mexico was absorbed into the United States. This led to the 1925 founding of the Spanish Colonial Arts Society. The artist Frank Applegate (1881–1931), an enthusiastic founding member, got wind of the situation in Llano and purchased the old altar screen for the society in 1928. The following year, it was installed in the Palace of the Governors, where it has been on loan ever since.

Rafael Aragón (died 1862) was the author of this work of public art, which is so much more ambitious than the private devotional paintings that constitute the stock trade of santeros. He was a successful, literate, landowning professional when, in 1834, he relocated from Santa Fe to the tiny village of Quemado (now Cordova), some thirty-five miles distant in the Taos Valley. Why? Could it have been just to meet this artistic challenge?

Robin Gavin, curator of the Museum of Spanish Colonial Art, pointed out that Santa Fe already had all the altarpieces it needed, but the remote settlements did not. Prospective commissions may well have been offered by the priest newly responsible for the outlying communities, one Fernando Ortiz, who had previously buried the artist’s first son and baptized his daughter. In the museum’s library I pored over the manuscript of an in-depth study by Keith McElroy of the eighteen surviving altar screens that Rafael Aragón created for churches in the region. The photocopied pages came to life when the renowned scholar of Hispanic arts, William Wroth, arranged to take me behind the barrier and share his insights on this masterpiece at close range.

The Llano Quemado church was dedicated to the Virgin of Carmen. Otherwise known as Our Lady of Mount Carmel, she was popular in New Mexico as the intercessor for souls in purgatory. She must have had a special meaning for Rafael Aragón, since he carved a sculpture of her to pay for his burial in the chapel dedicated to her in the church at Santa Cruz. He depicted her in the upper rank of the Llano Quemado altar screen, crowned as queen of heaven, with her attributes of scapulars—a term that refers both to the length of fabric worn down the front of her brown monastic habit and to the miniature versions, or badges, used by lay confraternities, that she and the Infant in her arms hold out as a means of redemption.

St. Joseph is paired with the Virgin, and McElroy identifies the figures directly below as her parents, Anne and Joachim, together forming the so-called Santa Parentela, Christ’s earthly family. They are surrounded by spiritual and militant guardians: on the upper tier two Franciscans, St. Francis of Assisi opposite St. Anthony of Padua; and below Archangel Michael brandishing a sword and St. James Major on horseback trampling Moors. They all turn towards a missing crucifix that would have been secured in a hole McElory discovered bored in the center of the altarscreen’s baseboard.

The core values of the village, defense of family and faith, are here writ large by the artist, Rafael Aragón. Adapting to the needed scale, he pushed his loaded brush in sweeping strokes to define his figures. Setting off each one with draperies and carved and painted uprights that resemble twisting columns, he evoked the theatricality of great churches. Finally he joined his own initials, A R, to the dove of the Holy Spirit, who, reversing his usual descent, soars heavenward, propelled by the power of a shared faith.