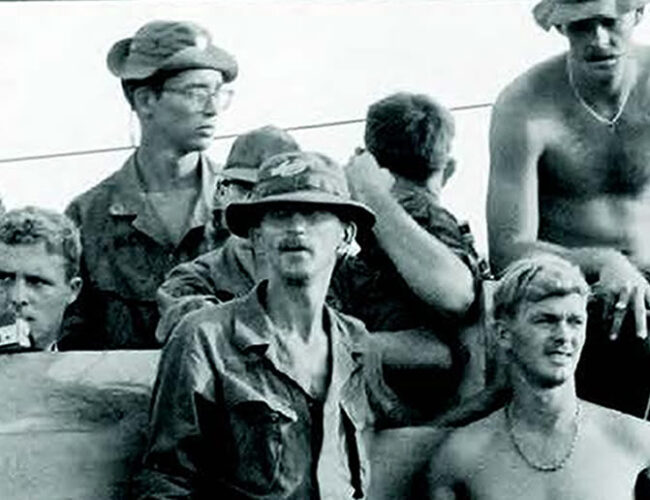 Troops at the USO show.

Since the early seventies, fine art and commercial photographer Herbert Lotz has enjoyed the earnest regard of the Santa Fe museum and arts community. A Chicago expat and Vietnam veteran, Lotz credits New Mexico for giving him a new life. And now, the New Mexico History Museum is giving him a solo show.

Sleeping During the Day: Vietnam, 1968, curated by Daniel Kosharek, includes thirty-three black-and-white images on view through October 1, 2017. Kosharek is photo curator at the Palace of the Governors Photo Archives, which has housed the Herbert Lotz Collection since 2008. A survey of Lotz’s personal letters from Vietnam accompanies the photographs.

As a young artist struggling to make a living, he recalls serving Georgia O’Keeffe at a catered affair. Decades later, Lotz would be contracted to photograph her Abiquiu property for the tenth anniversary of the Georgia O’Keeffe Museum. Since then, Lotz’s work has been exhibited in numerous prestigious local group shows, most recently his 1970 Chicago-to-Santa Fe landscapes for Alcoves 16/17 #1 at the New Mexico Museum of Art. Lotz also received early commissions from the Wheelwright Museum of the American Indian.

Lotz has occupied a comfortable downtown bungalow near the plaza since 1980. He added an eight-foot, gated adobe wall “to block everything out;” a symbol of the emotional bunker Lotz began erecting after his 1969 military discharge from Vietnam.

Lotz was a third-year photography student with dreams of a professional art career at the School of the Art Institute of Chicago in 1967. All of that changed when his part-time job at Niedermaier furniture company interfered with his ability to carry a full credit load. Lotz was drafted into the army. He completed infantry training at Fort Huachuca in the Arizona desert and went on to serve as a radio operator at the base camp of the 25th Infantry Division at Củ Chi in Vietnam.

In the midst of 1960s Chicago’s hotbed of student unrest, Lotz was never tempted to dodge the draft by going underground or fleeing north to Canada. And without judging draftees—gay and straight—who claimed 4-F status (Unfit for Service) for homosexuality, Lotz, also a gay man, elected not to after seeking advice from a former vet.

Later, in a letter from Củ Chi to his Chicago friend Helen Doroshow, Lotz wrote, “To fight for something you believe in, if it conflicts with society, can be quite a battle too—and these chaps put themselves up for scrutiny when they get deferments—but if they are against the war, and killing, why not fight it—go to jail if you must—I really couldn’t face taking the back door out—I was so afraid, Helen—I can’t ever tell you— the army for me was the battle…”

Although he did not flaunt his sexual orientation, Lotz does not recall pressure to hide it. “They needed us,” Lotz says. Gay military discharges dropped significantly at the height of the Vietnam War. And survival was more on his mind than the risk of dishonorable discharge.

The National Archives houses a quarter of a million military photographs from the Vietnam War. In addition to the US Armed Forces’ own team of military photographers, the American press documented the war from within conflict zones.

“Everybody had a camera,” Lotz recalls. From 1968 to 1969, Lotz captured his war experiences with a dependable Nikon Nikkormat, probably recommended by a professor.

Lotz left the graphic war imagery to others. As this unique survey of Vietnam photography reveals, the trauma of nightly battle was not something that he wished to chronicle.

In Sleeping During the Day, Lotz captures the fitful exhaustion of achingly youthful fellow soldiers splayed out on cots; arms flung and fists closed, filtered by indirect daylight. Other stolen daytime moments include a serviceman grooving on headphones to his new reel-to-reel (page 70); his friend Doug sporting aviator sunglasses while reading Life magazine; and a Vietnamese “hooch girl,” or barracks cleaner, pausing in the door frame of Lotz’s shared barracks, before returning to her chores.

Lotz’s Nikkormat also chronicled the smoky haze of the base Enlisted Men’s Club, where rapt recruits monitor a closely supervised striptease act. Later, he photographed fellow soldiers watching a packed Bob Hope USO show under an open sky. Instead of abandon, Lotz captured “their exhaustion…the weight on their shoulders.”

And as the contents of his personal letters home from Vietnam attest, it was with a pen, not a lens, that Lotz revealed wartime trauma—selectively. In addition to his letters to Doroshow, which were ideological and political, Lotz frequently wrote to his parents, Clarence and Teresa, in stream-of-consciousness longhand, without capital letters, on torn rolls of yellow teletype paper.

Mindful that his parents carefully monitored Chicago’s morning newspapers, Lotz did his best to reassure them. “To ease your mind, this place is one of the safest…” He also sent photos of mundane camp activities, and the occasional selfportrait: “Did you get the one where I’m standing by my rig? I think that’s the best one so far!”

Lotz reserved his mounting wartime anxiety for lover Frank Spinozzi, a 35-year-old Chicago advertising executive. Of his first air attack Lotz wrote, “We were hit by the VC with mortars and rockets at 1:00 a.m.…the whole thing was very frightening and scared me shitless…”

His letters home included expressions of gratitude to his mother for the forwarded canned fruit, to Spinozzi for blue packs of French Gauloises, and to Doroshow, who faithfully processed his negatives and sent new film for the Nikkormat.

Expressing hope for the Paris peace talks, Lotz wrote Spinozzi of “big gun fights going on with B-52 jets diving and delivering bombs and napalm—helicopter gunships dropping tons of lead on the enemy, artillery fire and small arms fire…” Then, in a following paragraph, he noted that the clasp on a favored gold necklace kept breaking: “At your leisure would you stop by Tiffany’s and pick me up a new one?”

Spinozzi replied with accounts of his own activities, such as this weekend business trip to Manhattan: “I can’t tell you about the wonderful things that happened…I was so well received… Peggy Moffitt’s husband and I had a drink at the St. Regis!”

But when Lotz’s letters grew increasingly fearful and dark, Spinozzi offered encouragement. “Yes, you might die…but you will live, Herb. And when you come home and think about everything you’ve been through the past year…the Crisis: Will Herb Lotz have grown under it or will Lotz shrink under the experience of it…One year is such a small part of one man’s life.”

After Democratic presidential contender Robert F. Kennedy was assassinated in 1968, Lotz wrote Doroshow, “So Kennedy is dead…I caught a young man, radio up to his ear, crying— and that made me sad. My greatest fear right now is being over here if something breaks at home…these fellows have enough problems…without having to worry about the safety of their families…and people won’t be thinking about the boys in Vietnam while their cities are burning down…I’m so tired of lie after lie after deceit.”

When Lotz returned home in 1969, Chicago had changed and so had he. After two years of letters and care packages, his parents didn’t seem to recognize him. “They really thought I’d be killed,” he reflects. “They never thought I’d come back alive. They had grieved my loss.”

Expecting to live with Spinozzi and resume his photography education, Lotz discovered that someone new had taken his place. In 1970 he hit the open road. An acquaintance suggested that he try New Mexico. He found it to be a receptive and welcoming new home. His friend Helen Doroshow later followed him.

In the early 1980s, post-traumatic stress symptoms began to intrude on Lotz’s equanimity. Luckily, this manifestation dovetailed with the release of a Veterans Administration campaign developed under President Jimmy Carter to address the special needs of the Vietnam veteran. Lotz reached out. Once again, New Mexico supported his postwar growth and healing. “Two fellows from the Albuquerque Vet Center drove up to visit me,” Lotz says. “They probably saved my life.”

Lotz found selecting photographs and reviewing letters for Sleeping During the Day to be challenging. His parents died years ago. Faithful pal and respected Taos humanitarian Helen Doroshow died in 2008. And prescient Frank Spinozzi, who knew of and blessed this exhibition, passed away suddenly in September of 2016.

Lotz’s decade-by-decade photo oeuvre reveals portraits— from birthday to death and life in-between; rodeo—gay and amateur; men kissing; and always, the human figure. Plans for art books and other exhibitions are in the works.

These days Lotz tools around Santa Fe in one of his twin cargo trucks. Not surprisingly, among Lotz’s favorite local spots is the historic Santa Fe National Cemetery: “High on a hill, overlooking the city, and one day a place to rest,” Lotz wrote recently, “but no hurry.”

Gregory Hinton is a writer, historian, and the producer of Out West, a national museum program series dedicated to shining a light on LGBT history and culture in the American West.

Sleeping During the Day, a solo exhibition of photographs, opened on April 7 at the New Mexico History Museum and runs through October 1, 2017.