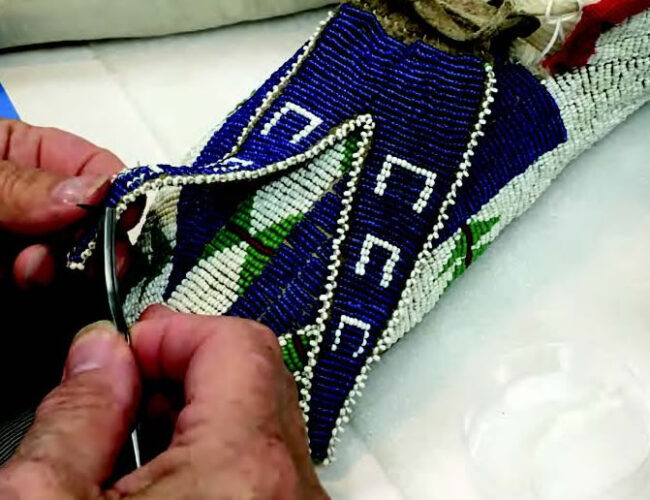 Dust, to most people, isn’t really all that fascinating. Sophie Hunter, a graduate intern at the Museum of New Mexico’s conservation lab, begs to differ. “It’s probably the most important thing we deal with as conservators.” This is good, because looking around at the pieces she and senior conservator Maureen Russell are working on for the No Idle Hands tramp art exhibit that opened in March, there’s a lot of dust. A couple of weeks before opening, wooden boxes, pieces of furniture, picture frames, and weird things that have doors and sliding bits and seem to serve no sure purpose are laid out on staging tables and shelves around the lab. Each is made up of seemingly infinite nooks and crannies, the work of craftsmen and artists that carved up cigar boxes to create objects that look for all the world like little Mayan pyramids (read the tramp art exhibit overview here: Tramp Art).

As the exhibition deadline nears, Russell and Hunter are working just this side of feverishly to get everything ready. There’s dusting (of course) but also stabilization, and occasionally even repairs to do before the first show of this artwork in nearly fifty years. To an outsider, though, there’s something even more apparent than dust and adrenaline in the air. It’s been a sort of subtext over the last year in talking with conservators elsewhere in the museums. But in this case, it’s explicit: a peculiar way, and a way of thinking about, teaching and learning.

Becoming a conservator is like joining a guild. Yes, there are formal graduate studies, and almost everyone who wants to work in the field needs to do that nowadays. Russell went to Harvard’s Straus Center for Conservation and Technical Studies after a degree in fine art from Pennsylvania State University and a stint at University College London’s Slade School of Fine Art (and an impressive career in painting). Hunter earned a history degree at the University of Chicago, and then spent some time at the Southwest Museum of the American Indian and the Natural History Museum in Los Angeles, as well as the Smithsonian before heading into Buffalo State’s Art Conservation program.

Both women are passionate about what they’re doing. Russell, even with thirty years of experience worn so lightly and modestly that it’s hard to believe, talks about the field in terms of pleasure and fulfillment. “When I was just getting started in the 1980s, it was amazing for me to discover that I could do all the different sorts of work I loved, whether it was color mixing, replicating surfaces, whatever—just to ensure a piece of art could live on.”

Hunter, although by no means a novice—having spent time before and during the summers while in graduate school in places and on projects as diverse as reconstructing canopic jars in the Egyptian desert, and restoring chapel gilding in Jalisco, Mexico—points to her volunteer time at the Southwest Museum of the American Indian as the beginning of her excitement with it all. “There,” she says, “was the perfect combination of what I love: interesting collections, history, working with my hands, and art.”

But, what’s evident in talking to them is the extraordinary value both ascribe to the time spent outside the classroom in shaping successful careers in the field. Hands-on internships and apprenticeships permit students to work with practicing conservators doing real conservation, and the lessons can be as profound as they are electric.

When Russell was just starting to make the move from artist to conservator in the mid 1980s, she spent time in the Falls Church workshop of Charles Olin, just outside of Washington, DC. Olin was a big deal, one of the first professionally degreed conservators in the United States and the director of the Smithsonian’s nearly unrivaled conservation program.

During an early visit, a painting by Vermeer was on Olin’s easel. It depicted an older woman, hair streaked with gray, but her hands looked much younger. “It was perplexing,” Russell says, “and Charles just took a little swab, dipped it into a solvent, leaned in, and started taking off the hands! I couldn’t believe it! And then, little by little, the hands Vermeer had painted—really painted—were revealed: gnarled and old. Can you imagine?” she asks. “You know that some work has been ‘improved’ at times, but what a way to teach and learn!”

And while every demonstration of a new technique or a hard-earned trick isn’t so dramatic, that sort of intimate, hands-on learning from mentors and colleagues is at the heart of conservation practice. Graduate programs require it, and everyone knows it’s essential. “The only way to be successful for most of us,” says Russell, “is to know as much about as many things as we can.”

“It’s maybe the most important reason I came here, I mean aside from the reputation and wide-ranging expertise of the people,” Hunter says, glancing around at her busy colleagues. “When I was interviewing, they didn’t ask me if I wanted to work on paintings or on leather or on a particular collection. Maureen assured me I’d have a chance to work on all sorts of materials, to spend my time here more as a generalist than as a specialist.”

“In class, it’s the grade that matters. Out here, that’s not the point,” she says. “Out here, you’ve got to do the work; that’s what matters. Every day is about learning something new, so the next place I go I have better questions to ask and more to contribute.”

“That’s exactly it,” Russell says. “There are places where you can work as a conservator of mid-century plastic furniture, but those jobs are both very rare and sort of, well, boring.” “The diversity in the museum’s collections is incredible,” says Hunter. “And I can work on materials and pieces that require very different approaches.”

“We may think—or even know—that there is a particular way to do something, but Sophie has to find out for herself what works and in what situations.” Case in point: a 1950s shrine to the Virgin Mary, acquired by the museum, that had spent sixty years watching over the back of a small family shop, not exactly forgotten, but a little worse for the wear.

“The thing about dust,” Hunter says, “is that if you don’t remove it, it starts a chain reaction. Dust attracts moisture, moisture leads to grime, grime attracts bugs.” So she tackled the dust first, using cotton swabs, Japanese brushes, and time. From there it only got more interesting. Because in addition to all the other things she’ll have to do to make this piece ready, she’ll have to do something with the used-to-be-shiny brass paint on the wood, which is now a mottled, brownish, mosslike covering.

There are a variety of common ways to deal with the results of metals and oxygen commingling. And then there’s the one that Hunter and Russell decided on for the care and stabilization of the shrine: an ammonium citrate solution. “It basically grabs the corrosion, makes it soluble in water, and then I can just wipe it off,” explains Hunter.

She pauses for second or two. “It is sort of a controversial technique, because every time you swab away some the corrosion, you’re also taking away something of the original brass paint.”

“Yeah, it is and it can,” Russell says, “but we did some initial testing and talked to the curator about it, and we all felt we could do it responsibly in a way that would allow Sophie to understand how it works and how it might be used in certain circumstances to solve specific problems.”

That’s pretty much the way things work in the lab. “Almost everyone had something to teach me on this piece,” Hunter says. “The silk pillow against which the statue of the Virgin rested was stained with oxidized metal from the pins holding paper flowers, most of which were falling apart. I worked with Angela [Duckwall, textile conservator] on the cleaning and stabilizing the silk. Maureen taught me to use mulberry tissue to recreate some of the flowers, and then showed me how to match the colors. Larry [Humetewa, object conservator] worked with me on wood stabilization.”

“And it’s more than just the people in the lab,” Hunter continues. “Unlike a lot of places, I get a chance to work with other departments. In most places,” she says laughing, “you don’t even get to email, much less talk, to a curator.”

Of course, there are also lots of other ways to learn and to collaborate; it’s not all through the mentor/apprentice dynamic. Russell and Hunter reel off the names of conferences, journals, Facebook pages, and discussion email lists that are common to their work. But there are differences in the thirty years of experiences and experience that separate them.

“My classmates at Buffalo are my lifeline, a lot of the time,” says Hunter. “We’ve got paper, books, paintings, and objects majors represented and so we use things like text message threads to ask questions and see if anyone has dealt with a particular problem.”

For someone like Russell, who has current and former colleagues all around the world, it might be those intimate moments as they courier pieces of art back and forth between museums and galleries and private collectors. “Everybody knows everybody,” she says. “It’s an unbelievably supportive and constantly gratifying network.”

On a high table just behind her desk, Hunter has been working on a picture frame for the upcoming show. It features certain well-known “ladies of the London stage,” and the boat captain that carved it—if his dedicated labor is any indication—had an undeniable appreciation for them. It is an elegant piece, made up of hundreds of notched, interlocking wooden spindles, some of which Hunter has been painstakingly stabilizing with fish glue before dusting with a Japanese watercolor brush.

Next to it is a colorful, cartoon-themed trifold bundle, which looks like an itinerant chef’s knife roll, that is the home of that brush. Inside is a collection of necessary items that she’s made and collected—among other things exotic and mundane, there’s a letter opener that belonged to her grandfather, which comes in handy for scraping off old adhesives, a wooden hand tool made from scratch, and bamboo skewers, onto the tips of which she has superglued sandpaper.

It is a collection of tools to combine with a collection of techniques. Russell’s own collection is a little larger, features more of some things than Hunter’s, and less of others. Yet they each, amid work and conversation, reach in to pull out what they need. It’s the way.

Peter BG Shoemaker writes about conservation for this magazine, and elsewhere about art, food, culture, and the future.