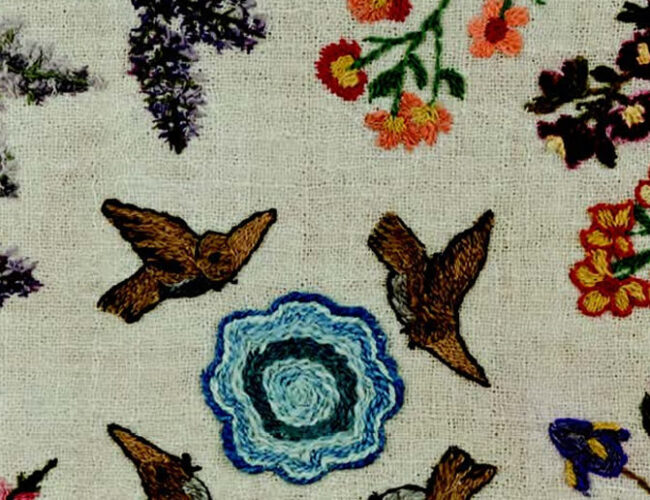 The exhibition Negotiate, Navigate, Innovate: Strategies Folk Artists Use in the Global Marketplace opens June 9 in the Museum of International Folk Art’s Gallery of Conscience. It explores the ways in which folk artists from around the world and in New Mexico work within the global market setting.

Preserving Tradition showcases works by artists who carry on the legacy of artistic practices handed down to them from previous generations. While some design styles and elements may change over time, these artists aim to create contemporary works using traditional skills, techniques, and motifs. Louie García, of Tiwa Pueblo heritage, creates hand woven mantas (dresses) that are still used within his community today. Kathleen and Weyland Sanchez, from San Ildefonso Pueblo, use local clay to bring the spirit of their ancestral lands to their sculpted animals and pots. Adbul Jabbar Khatri, from Gujarat, India, creates tie-dyed silk shawls, scarves, and saris; the tie-dyeing technique is called bandhani. He continues an ancient tradition that is still in use today by his community and outsiders alike. Nilda Callañaupa, Peruvian weaver and director of the Centro de Textiles Tradicionales del Cusco, maintains centuries-old traditions by using natural wool and dyes from the high Andean Mountains. Julia Gomez of Santa Fe preserves the local colcha embroidery tradition by creating embroidered coverings of centuries old floral designs and patterns on handwoven sabanilla (plain weave base cloth for embroidery).

Transforming Communities includes works by artists who have used the marketplace to help support their local communities via creative financial endeavors. Rangina Hamidi heads up the cooperative Kandahar Treasure, whose members create embroidered Afghan shawls and scarves. The women of the collective created the shawl on display. It is a wonderfully detailed signature example of Kandahar Treasure’s full-time master embroiderers. The Sefrou Woman’s Silk Button Cooperative of Morocco is led by Amina Yabis. Their specialty is crafting cloth buttons traditionally used on kaftans. While the artisans still make these buttons for traditional purposes, they also incorporate them into other works, such as necklaces and chokers.

Raising Awareness demonstrates artists using the marketplace as a platform to illuminate social justice issues within their communities. Santero Andrew Montoya of Santa Fe paints retablos using traditional methods, but makes references to modern concerns. His contemporary image of Nuestra Señora de los Dolores (Our Lady of Sorrows) is depicted with the signature seven swords; however, upon these he has written seven sorrows of contemporary society: drugs, hate, war, death, poverty, hunger, and refugee. He has aptly named his work Los Dolores del Mundo (The Sorrows of the World). Rafael Cilau Valadez, from Nayarit, Mexico, is of Huichol/Wirikuta heritage. He comes from a family of Huichol yarn painters and uses traditional techniques. In his piece, Our Tradition, Your Greed, Our Destruction, he applies both traditional and contemporary imagery using digital technology. This piece reflects issues related to loss of sovereignty, protection of the land, and water rights, and raises awareness about the preservation of his community. The exhibition includes an original yarn painting representing the cosmology of the Huichol people, titled The Transformation of the Wolf People into Huichols and the Origin of the Peyote Tradition, by Valadez’s father, Mariano Valadez.

Expanding Tradition focuses on new and innovative pieces that contemporary folk artists are often inspired to create to reflect their current situations and also appeal to a growing consumer market. Akeem Ayanniyi is a sixth-generation Nigerian drum maker, now living in Santa Fe. His most recent pieces express  his unique experience as an African immigrant. On the body of his large djembe drum is a carved and painted Zia symbol as seen on our state’s flag. Jeweler Ray García of San Felipe Pueblo creates contemporary, innovative pieces using traditional techniques and natural stones to combat the rise of factory made pieces that use imitation materials. Similarly, Irvin and Lisa Trujillo create Chimayó weavings from natural churro wool, while also incorporating newer, non-traditional fibers such as silk into their pieces. They weave for the local community as well as international consumers. For example, they use traditional ikat dyeing techniques (in which the threads are tie-dyed), to weave vests that are popular in Japan.

Several pieces from the holdings of the Museum of International Folk Art will also be on display to augment the exhibition. These include an antique embroidered Afghan veil from the early twentieth century, historic colcha embroidery from the nineteenth century, and an original José Aragón retablo of Nuestra Señora de los Dolores.

Nicolasa Chávez is the curator of Latino/Hispano/Spanish Colonial Collections at the Museum of International Folk Art.