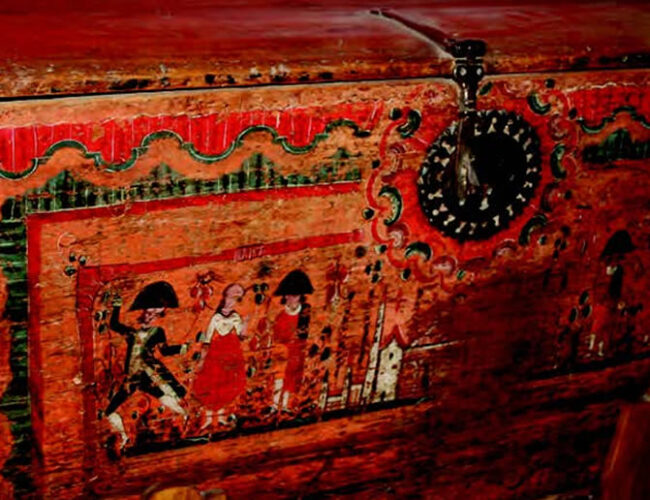 As I enter the Palace of the Governors, I often stop at the doorway on the left. It opens onto an austere room—the Office of the Governors—where locally made wooden chairs sit around a table, representing long gone administrations: Spanish, Mexican, Territorial.

Recently, I noticed for the first time a large, painted wooden box on a stand, almost hidden in the shadows of the near corner. The label identified it as from the Mexican state of Michoacán, the gift of J. Stewart Harvey, Jr., a direct descendant of the railway hotelier Fred Harvey. In the early decades of the twentieth century, the Fred Harvey Company collected Hispanic pieces as well as Indian arts for sale in the hotels’ gift shops. When the family sold the company in 1968, they created a foundation for the collection. The Indian art was later donated to the Heard Museum in Phoenix, while Santa Fe’s Museum of International Folk Art (MOIFA) received the Hispanic works. The piece in the History Museum must have been one of the few that family members retained, as the Museum’s 1999 acquisition record states, “Item was given to the donor by his grandfather, has been in the Harvey family for many years.”

I made an appointment to examine the chest more closely. I discovered that it followed European carpentry traditions, with carefully measured pine boards skillfully dovetailed to prevent warping, together with original reinforcing iron brackets, hinges, and a lock with a circular ornamental lock plate. However, the painted decoration, which depicts two scenes within a painted frame on the front of the chest, was what set this piece apart.

On the left, a young woman ignores a handsomely attired, hyperactive fellow who vies for her attention as she leans toward a second, quiet gentleman. On the right, she has turned away to favor her well-dressed suitor. I could find no model for the episodes in libraries, but the men’s tricornered hats and the animated suitor’s detailed doublet, waistcoat, and gaiters resemble the attire of Spanish gentlemen in eighteenth century casta paintings that illustrate Mexico’s social classes.

Robin Gavin, curator at the Museum of Spanish Colonial Art, compared the painting to a Mexican shawl that was part of the Harvey donation to MOIFA, where some forty embroidered figures in eighteenth-century costume romp across the length of the weaving. Though the narrative in the shawl was indecipherable, MOIFA curator Nicolasa Chávez suggested a scenario that fit the chest: perhaps the static observer was the young woman’s parents’ choice of a spouse, but the elegant and ardent suitor has won her over.

When a number of similar chests made their way into in New Mexico in the 1920s, the collectors assumed that they were made locally. Not so, according to inventories that Lonn Taylor and Dessa Bokides publish in their invaluable book New Mexican Furniture. Furnishings were scarce in Colonial New Mexican homes, but eighteenth-century inventories do list chests, cajas, identified as imports from Michoacán. These objects held treasured belongings: in the case of a Spanishborn trader it was his silver-laced coats and silk vests. As wealth increased in New Mexico in the nineteenth century, so did the number of chests. Although furniture was certainly being made locally, a third of the chests appearing in inventories were described as Michoacán.

Gavin identified Asia as the decorative source of the chest I was researching. She reminded me of the importance of the Manila trade, in which Spanish galleons from the sixteenth century on brought Chinese and Japanese goods from the Philippines to Acapulco, Mexico. From there, they were transported through Mexico City to the east coast port of Veracruz for shipment to Spain. Many items remained in Mexico, inspiring local production. In MOIFA’s storage area, Chávez showed me Chinese and Japanese chests next to Michoacán examples that demonstrate the fusion of East and West that is characteristic of Mexican art.

But why this localized production? Chávez recalled a trip to Mexico to visit the craft artists of Michoacán. When asked about the origins of their tradition, the artists cited one name over and over: Quiroga. In 1563, Vasco de Quiroga was appointed the first bishop of Michoacán. He settled the Indians in towns where they learned not only religion, but self-governance and crafts, establishing specialized craft centers that thrive to this day.

The painted chest in the Office of the Governors stands as a quiet reminder of the 47th American state’s deep roots in Mexican history.