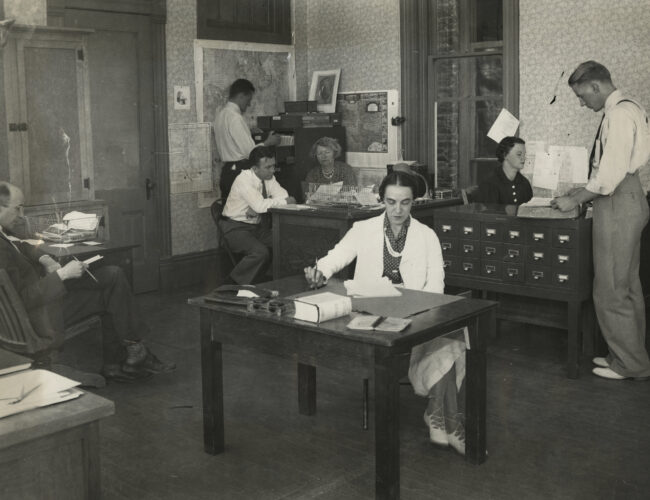 Publications are the work of many people, and the Federal Writers’ Project, founded in 1935, was no different. This WPA-era photograph shows only a few members of the initial New Mexico team—relief roll workers, folklorists, researchers, translators, historians, news writers, typists, illustrators, editors, students, and volunteers—assembled by project director Ina Sizer Cassidy.

Working under the guise of a proposed five-volume grand overview of the history, scenery, and wonders of America, in its first year the Writers’ Project employed fifty-five people for New Mexico’s contribution to the American Guide. With a quota of 57,000 words for the final project, less than six months in, Cassidy joked that “copy is flowing into the State office at the rate of 20,000 words a week, and … editors are trying to dam the flow of words with sturdy blue pencils.” In March 1936 alone, the workers contributed 250,000 words.

Thus, much of the work went unpublished, leaving a well of important primary and secondary sources for research. The Writers’ Project quickly evolved to include translation of archival documents from the Spanish and Mexican eras held by the Historical Society of New Mexico and the State Land Office. It also oversaw a survey of state and local historical records, starting with territorial records, correspondence, and miscellaneous books found in the basement of the state capitol.

Interviewers fanned out and collected folk stories, tall tales, and historical yarns from New Mexicans. Folklorist Lorin W. Brown, whose father was Anglo and mother nuevomexicana, recalled spend-ing his workdays renewing old acquaintances, chatting in the afternoons and evenings with elders, and typing until 2 or 3 am, only to get up for brunch and resume his schedule. It was not office work. He said, “I mailed all my manuscripts in to the head office, rarely going in except on occasions.” Similar remote work was contributed by writers Georgia Redfield of Roswell and “cowboy poet” Jack Thorp of Albuquerque.

Even though this photograph was probably posed and taken by a WPA state photographer such as Roger H. Dawson or D. Orton Smith Jr. to emphasize the bustling activity of project staff, this busy mid-twentieth-century bureaucratic office, with its typewriters and dictionaries, card catalogs and filing cabinets, seems striking today. After decades of slow transitions towards digital and paperless work, office work during the COVID-19 pandemic has quickly shifted to work done remotely, but often alone.

See additional New Mexico WPA pieces in the New Mexico History Museum’s exhibition Looking Back: Reflecting on Collections. The physical exhibition will be on view until October 2021, and there is a virtual tour now available here.
—

Hannah Abelbeck is the photo archivist in the New Mexico History Museum’s Palace of the Governors Photo Archives.